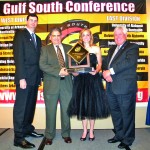 Southern Arkansas volleyball standout Maggie Glover reached the pinnacle of the Gulf South Conference when she received the league’s top award in being named the winner of the 2010-11 Commissioner’s Trophy on Monday, June 20.

The Commissioner’s Trophy is the highest honor bestowed by the conference and one of the most prestigious individual honors in NCAA Division II. The conference recognizes one male and one female student-athlete with the award each year.

There were 23 student-athletes from across the conference nominated for this year’s GSC “Top Ten” from which the Commissioner’s Trophy honorees are selected. Criteria is based on athletic achievement, academic excellence, and extracurricular activities, leadership and community service.

Glover is SAU’s second all-time women’s student-athlete to receive the award and the fourth from Southern Arkansas overall.

Glover was the only graduate student among this year’s “Top Ten” field, having begun that course work during her final season. The focal point of this year’s Lady Mulerider volleyball team, she guided the squad to a 20-12 mark, a 19-win improvement over the 2009 season, which was one of the top turnarounds in the country. Her .440 attack percentage set a school record, led the league, and ranked fourth in Division II, and is the second-best mark in GSC history for a season. This year she became the Lady Muleriders’ fifth player all-time to reach 1,000 kills for a career, finishing with 1,037, and ranks in the top five all-time with 364 career blocks.

For her efforts on the court this season, Glover was a second team selection on the Daktronics All-South Region team, was named first team All-GSC, and was honored as both a GSC West Division defensive and offensive player of the week. In April she received Southern Arkansas’ women’s Auburn Smith Award, the highest accolade a student-athlete can earn, and was awarded volleyball’s most outstanding athlete.

Glover was actively involved in the Association of Baptist Students (ABS), Fellowship of Christian Athletes, and Forward Club. She served as a student affiliate in both the American Psychological Association and the Arkansas Counseling Association, and was an SAU President’s Ambassador.