Miss Southern Arkansas University 2011 Rianne Herron definitely has blue blood in her veins – blue and gold to be particular. SAU has become a bit of a family tradition for the Herron family, of Omaha, Texas. Rianne’s parents, Ronny Herron and Perla Varner Herron, met on the Magnolia campus when they were Muleriders majoring in Physical Education in the 1980s. Little sister, Chynna, joined her older sister on campus in 2010. 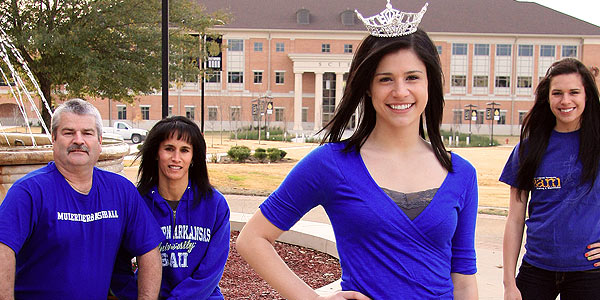 It’s not often that a girl wins a crown, but winning two crowns within a month is a phenomenal feat for anyone. Such is the case for Miss Southern Arkansas University 2011 and SAU Homecoming Queen 2010 – Rianne Herron, a pre-dentistry major.

Perla came to SAU, inspired by her brothers, Kevin and Eddie Randolph. Ronny came to SAU to join his friend, Ricky Ogden, on the Mulerider baseball team.

“Having graduated one of 18 students (in Hatfield, Ark.), I looked forward to a larger educational setting,” said Perla. “However, when I arrived, the faculty and staff treated me as an individual student, not as a social security number.” Perla was most influenced by Coach Delwin Ross. Ronny’s mentor was Coach Larry McNeal. Rianne has her own favorite – Dr. Claude Baker.

A coach in Hughes Springs, Texas, Ronny has brought several of his athletes to SAU, who fell in love with the experience and did very well as Muleriders.

The Herrons are most impressed with the growth spurt and building projects that dot the campus – products of Dr. David Rankin’s Blue and Gold Vision, a $130-million capital campaign. Perla admires the new buildings and dining facilities. Ronny loves the improvements to the athletic facilities.

“SAU has made great strides in upgrading,” said Ronny. “I think the baseball field is one of the best in college athletics. I can hardly wait to see the new press box being added on.”

httpv://www.youtube.com/watch?v=yoq-Pu6DZ5M Rianne, a pre-dentistry major who scored a 29 on her ACT without a calculator, and Chynna, a phenomenal athlete with a desire to become a trainer or coach, had opportunities to go to other universities, but their blue genes drew them here as well as others influenced by the family with blue genes.

“Four other students from my Pewitt High School graduating class (came to SAU). Coming from such a small high school – 45 in my graduating class – that is quite a big number. I liked it here so much, I pushed Chynna to come,” Rianne said with a laugh.

“Chynna can be quiet at times, when she is around people she doesn’t know. I knew SAU was the place for her.“

Three years older, Rianne felt like she missed out on her younger sisters high school years.

“Having her here has been amazing and my parents are constantly coming to see us and attend school  events,” she said. “I’m so happy I chose to come here. SAU has so much to offer. It’s so easy to get involved.”