Being active on campus leads students to a number of activities, but few have the opportunity to be called the official Southern Arkansas University Mulerider.

Megan Maye, a freshman general business major from Mena, was chosen in February from a field of 11 SAU students who applied to be the next Mulerider. She succeeds Sunny Wilcox of Greenbrier who served in the position for three years.

“Megan is a bright young woman who will make a great Mulerider,” said Wilcox who is graduated from the University in May. “There is no one else I would rather hand the reins over to.” 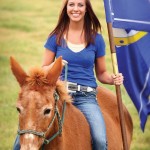 As the Mulerider, Maye will be an ambassador of Southern Arkansas University both on- and off-campus. The job requires much more than just the ability to ride a mule; the Mulerider may also be asked to represent the University by speaking or appearing at various events. Luckily for Maye, she has plenty experience.

Maye held leadership positions in FFA and other campus organizations throughout high school, but it was being crowned Miss Polk County 2010 that made her understand the impact leaders can have on those around them.

“Whenever I got to represent our county, that’s when I realized how important my actions were,” she said. “The decisions you make and the effort you put out represents your entire county.”

While a member of the Mena High School FFA chapter, Maye won the state championship in the FFA creed speaking competition and competed on the state level in the extemporaneous speaking event. Growing up on a sheep farm, she also showed lambs in livestock shows, bringing home the grand or reserve grand champion titles on numerous occasions. She also participated in livestock judging competitions.

“It’s just a passion for me,” she said. “It wasn’t just judging livestock that I liked, it was the speaking part, too.”

Maye developed a reputation for her abilities at livestock judging competitions, and her passion led to numerous scholarship offers during her senior year of high school. Several larger universities that specialize in livestock judging recruited her, but something was missing.

“Whenever I went to other colleges and viewed them, I never felt at home,” she said. “But the minute I stepped on campus at SAU, I felt at home.”

Having the opportunity to meet with faculty members and University administrators one-on-one during the “Becoming A Mulerider” student orientation was one advantage SAU offered. She also noted that once classes began, her professors seemed to be “more of a mentor – not just a teacher.”

“Someone cared enough to know my name and where I’m from,” she said. “It’s not the same at the bigger schools.”

Maye is a part of the Residential College at SAU. This group of freshmen live in Fincher Hall and are required to perform community service hours throughout the year. She said the community service work helps to keep her and other students “grounded” by motivating them to think of others more than themselves.

Applying to be the new Mulerider was not a decision Maye made on her own. A friend mentioned seeing the advertisement for the position, and after much prayer and consideration, she applied.

“I just really wanted to do it because it’s a great opportunity to serve our University,” she said. “I’ve ridden horses all of my life, and I knew I could handle the responsibilities that come with having the position.”

Although Maye officially became the Mulerider during the spring semester, most Mulerider fans may not see her until her football game appearances begin in the fall. Either way, she said she is looking forward to building a relationship with the University’s mule, “Molly B.”