Ashley Walthall: A crown of gems, a platform of patriotic pride 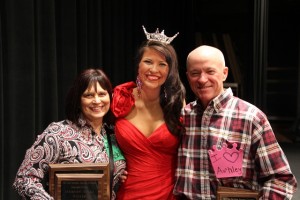 Miss SAU Ashley Walthall is no stranger to pageants. Though she has done pageants since elementary school, her pageant career became more serious at the age of 13 – at the same time her father, Ret. Sgt. First Class Teddy Walthall, deployed to Iraq with his National Guard unit based in Magnolia.

According to her mother, Donna (Farrar) Walthall, a former beauty queen in her own right, the busy pageant world became a distraction for young Ashley and herself.

“I’ve always been a daddy’s girl. I still am. When I was growing up, every night when he got home, I would take off his boots for him and pile up in the recliner with him until I fell asleep. He would tell me a story and tuck me in,” she said. “To have that for so long and then not have him there at all – it was really hard.”

Her mother shared the story of a younger Ashley and her apparent heartbreak at her father’s first deployment to Bosnia. As she watched him board the plane, the massive airport window was all that was between her and the airplane filled with his unit getting ready for takeoff.

“All you could see was Ashley pressed against the glass, with tears running down, screaming ‘Daddy, don’t leave me! Daddy, don’t leave me!’ It was so heart breaking, the others on the plane had to lower their shades. It broke their hearts and they couldn’t take it,” she said. “It was so hard for her to watch him leave. It was hard for everyone. The men [on the plane] told Teddy, ‘Don’t you ever do that again. I was crying and I didn’t know why.’”

They can laugh about it now, but the heart break was very real for the daddy’s girl. It was the first time that she had to be without her father for a significant amount of time.

“It was hard to live with the thought that any moment you would get a call. The suspense and worry takes its toll,” she said.

Ashley dealt with the pain by staying busy. From the time she was two years old, she had been enrolled in dance. From tap, river dance and clogging to hip hop, jazz and ballet, she tried them all. Tap remains her favorite. Pageants filled the weekends, so she wouldn’t focus on what was missing.

As a contestant in the teen system, Ashley had to choose a platform for the pageants. Her choice was immediate.

“I picked ‘Patriotic Pride: Supporting our American troops and their families.’ It’s so real and personal for me. You’re supposed to pick something you are passionate about and feel comfortable talking about it, but it has to be relevant, too. At the time, it was extremely relevant,” she said.

The junior business management major always knew that she wanted to attend Southern Arkansas University, where parents and older brothers, Scott and Adam, went. But, she also had a dream of becoming a stylist, so she conquered that first by attending a prestigious cosmetology school in Dallas.

“It was always my plan since the third grade to become a stylist,” she said. “I knew that I could do something I love and make good money while I’m in college. I didn’t have to work minimum-wage jobs. Now, my degree in business management will just enhance that.”

Though a contestant in pageants all of her life, Ashley waited to pursue the Miss SAU crown until later in her college career. She had to be sure she was ready.

“You are applying for a job when you compete for the Miss SAU title. It’s a full-time job to stay educated and on top of the news while representing the school and promoting your platform,” Walthall said.

Supporting American troops and their families is as important and as relevant to her as it was before her dad retired.

“It’s been over six years since he got back from Iraq and he’s still dealing with it. He couldn’t go to church for a while or any place with big crowds. On July 4th, we couldn’t even be around fireworks – not even a sparkler,” she said. “Whenever he hears loud noises, his face still turns pale.”