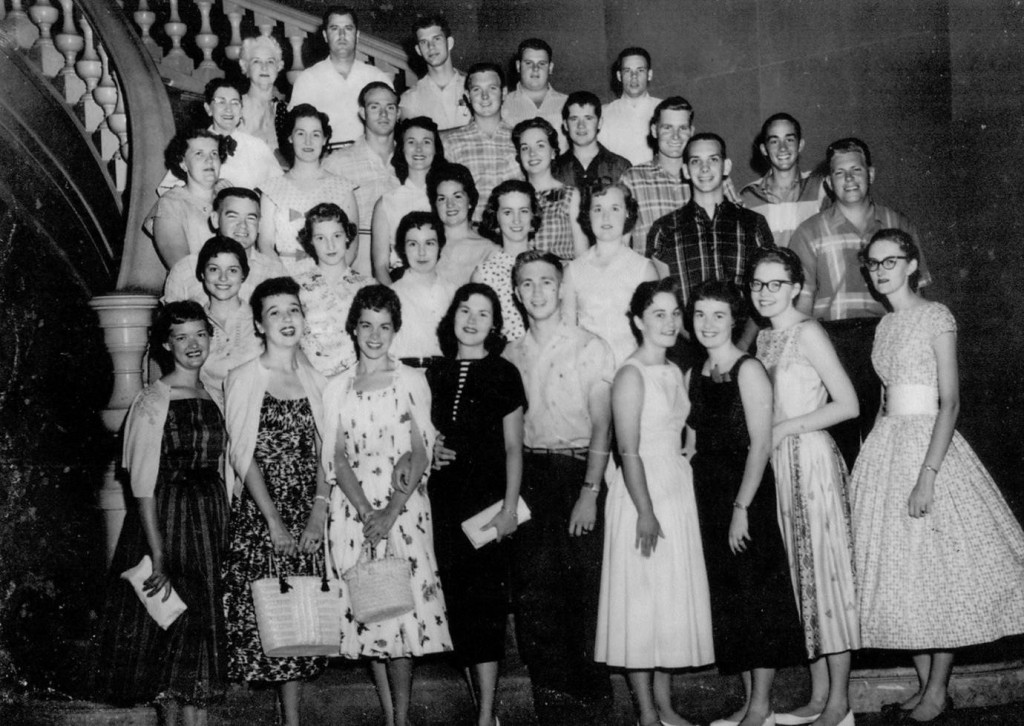 Southern State College first offered academic credit for study in a foreign country in 1957 when sociology Professor George Fay took a busload of students on a 38-day trip to Mexico. Students could earn six hours in history and sociology by taking notes and answering lengthy sets of questions about the 25 Mexican cities and innumerable historical and cultural sites that they visited.

Essential to the venture’s success was the bus driver, Earl Miller, at the early stage of his 50-year career at SSC/SAU. When interviewed recently, Cora Lou Brown (Robinson), then a senior, recalled that “Mr. Earl” drove more than 5,000 miles across mountains, deserts, and jungles and on the busy streets of Mexico City without incident.

The 25 students who boarded the 1950s school bus on Wednesday morning, May 29, were also accompanied by SSC art Professor Howard Farris and two ladies who served as chaperones. Each participant paid $200 ($1,590 in today’s dollars), which covered tuition, hotels, meals, insurance, visas, and museum fees – all expenses except souvenirs.

Entering Mexico at Nuevo Laredo, the bus moved south and west, upward across the Sierra Madre Orientale range. On day five, after many stops, the group reached the mile-high city of Saltillo and traveled to the nearby Battle of Buena Vista site. There, Arkansas soldiers took part in General Zachary Taylor’s 1845 defeat of General Santa Anna in the Mexican-American War. Students from Camden, no doubt recalled driving past the Buena Vista community, celebrating that victory, as they commuted on Highway 79 to SSC.

Driving south along the Sierra Madre Occidental range and on to Mexico’s central plateau, the bus stopped at numerous sites before reaching Mexico City on Sunday, June 16, just in time to attend a 4 p.m. bullfight. There was so much to see in the historic city: Aztec ruins and the Pyramids at Teotihuacan; Mexico’s historical and cultural treasures at the Palacio des Belles Artes, Biblioteca Nacional, and Meseo Nacional; and many more. For Cora Lou Brown, the highlight was the Palacio Nacional where she viewed the powerful murals of world-famous painter Diego Riviera. (Cora Lou herself later gained a national reputation as a folk artist. Her paintings have sold in galleries from Cape Cod to New York and from Florida to Texas.) She also vividly recalls a tour of Mexico City’s Federal Penitentiary, where she purchased a colorful woven basket from a prisoner.

After a week in Mexico’s capital, the travelers made a quick trip to Acapulco so students could swim in the Pacific Ocean for a day. Then, it was back on the bus to ride across Mexico, with stops along the way, to the Atlantic coast city of Veracruz and northward toward home. An overnight stay in Monterrey marked day 36 of a long trip. By Friday, July 5, the bus left Texas for Louisiana, where Earl took Cora Lou directly to her family home in Minden, before heading to Overstreet Hall.

Special thanks to Cora Lou Brown Robinson of Minden for sharing her memories and donating course materials and photos of the Mexico trip to the SAU Archives.