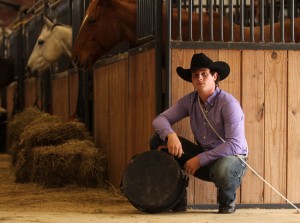 Reality shows were nowhere on Shaun Smith’s radar when he came to Southern Arkansas University to compete with the nationally competitive rodeo team and pursue a degree in marketing.

The Emmet native gained more than a top-notch education and calf-roping awards, he gained a little celebrity and experience in front of the camera on CMT’s “Sweet Home Alabama,” a show that pits 11 city boys against 11 country boys to win the affection of a bachelorette. In season three, it was former NASCAR model Paige Duke.

“We were in a house 24-7 with no distractions like TV. All you can do is talk, so our friendships became solid,” said Smith.

For Smith, the opportunity came at just the right time. Smith’s horse, Credit Card, was one of five stolen from Mulerider stables on Nov. 3 – the morning of the SAU-hosted regional rodeo.
Over two weeks later, four of the five horses were found neglected and tied to trees on wooded acreage in eastern Oklahoma. Credit Card’s remains were found a few days later and suspects were arrested in connection to the crime. Smith received the news of the tragedy during the taping of the show. His anguish was captured on camera, but he said he found comfort and support in the cast and crew who surrounded him during his first great loss.

“I am really thankful I got to go and at the timing of it all,” said Smith. “I think being with that group saved me in a way. It was the hardest thing I have ever had to go through and I can’t imagine coping with it any other way.”

As each week’s episode aired, CMT audiences bonded to their favorite picks of the bachelors. Smith’s popularity continued and he was one of the final three vying for Duke’s attention. Upon his return to school, Smith had to complete the course work for the semester within five days to meet his school obligations and to keep the promise he made to his parents to complete his degree, which he will achieve in December 2012.

Smith is confident in his upbringing and his education and experiences at SAU.

“Anything you build in life is based on having a good foundation. Success is no different,” said Smith. “The atmosphere and faculty and experiences here have been awesome.”

SAU’s College of Business and its student organization PBL sponsored a fan meet and greet fundraising event for the rodeo team, giving his growing fan base an opportunity to meet the cowboy up close and personal. It was a success, which speaks of the positive attention he has brought as a representative of the University.

Smith still stays in touch with his fellow cast mates and even played a role in getting a show favorite, cowboy Bubba Thompson, to make an appearance at the Magnolia Blossom Festival in May, where Thompson also served as a judge for the World Championship Steak Cook-off.

One positive thing that came from the sad experience of losing his beloved horse and partner was the generous amount of donations that rolled in from people touched by the stories aired about the event. Grateful for the offers and the positive outpouring, Smith supported using those donated funds to establish a scholarship bearing Credit Card’s name. When it is endowed, the scholarship will be awarded to aspiring SAU Rodeo team members.

“It not only creates an opportunity to change someone’s life by giving them a chance at an education, it makes Credit Card immortal,” said Smith. “It makes me feel good that his name carries on in a positive way.”