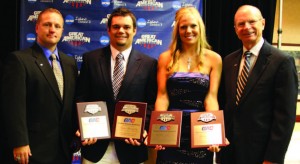 The Auburn Smith Award, given annually to both a women’s and men’s student-athlete, is the most prestigious honor a student-athlete can receive at SAU. The award is named in memory of Auburn Smith, who served as athletics director, administrator, coach and instructor at the university. Athletic ability, performance, character and scholastic achievement are all considerations by head coaches and athletic administrators at the university who select the honorees.

On the course this year, Patterson again recorded one of the most productive seasons in SAU women’s golf history, earning her second consecutive first team all-conference honor in being selected to the All-Great American Conference team, after receiving first team accolades last year on the All-Gulf South Conference team.

Patterson concluded her senior season with a 10th-place finish at the GAC championship. This season she won the individual title at the Henderson State Lady Reddie Invitational, placed second in the Arkansas-Monticello Commercial Bank & Trust Classic and tied for second at the UAM Boomtown Classic, and was third in the Arkansas Tech Dave Falconer Memorial. She had an 80.2 stroke average through 18 rounds this year, and finished 12th or better in all nine tournaments on the schedule.

As a member of the Mulerider golf team, Chrietzberg’s selection marks the first time in school history that both the men’s and women’s golf teams have swept the prestigious Auburn Smith awards. The senior is a two-year member of the team and sports a 3.43 GPA in business administration-finance.

Chrietzberg tied at 11th at the Great American Conference championship in Hot Springs, finishing at +13 in shooting a three-round 229. He also recently garnered his second consecutive conference honors in being named first team All-GAC.

Chrietzberg finished the season with a stroke average of 74.9 over 23 rounds,matching par or better in six. He had six top-8 finishes in 10 tournaments, including placing second in the Southern Arkansas Mulerider Invitational and tying at second at the Texas A&M-Commerce Texoma Chevy Dealers Lion Invitational.