Careers are for the dogs 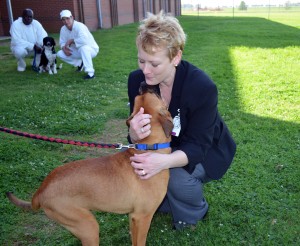 Shea Hutchens-Wilson greets one of her four-legged friends during a visit to see her new initiative in action, “Arkansas Paws in Prison.”

After more than 20 years as an award-winning journalist and newspaper editor, Shea Hutchens-Wilson had an unexpected change in careers, but she stayed true to her passion to her four-legged friends.

In April 2011, Hutchens-Wilson left her beloved career in journalism to take on the challenges of Communications Administrator for the Arkansas Department of Corrections (ADC). It was a move that surprised and saddened both herself and the south Arkansas community where she was editor of the El Dorado News Times.

The El Dorado community hosted a farewell roast for Hutchens-Wilson. The mayor presented her with a key to the city and she was recognized for her service to homeless animals. All proceeds from the well-attended event benefitted the Union County Animal Protection Society.

Her service for animals in need continued at her new post in Pine Bluff. She started a unique program called “Arkansas Paws in Prison,” which was a partnership with animal shelters and advocate groups in the state. Selected inmates, under the guidance of professional dog trainers, work with rescue dogs and teach them basic obedience skills.

“Each year in Arkansas, hundreds of homeless dogs are euthanized. Paws in Prison reduces the number by providing loving, obedient, adoptable pets,” Hutchens-Wilson said. “Paws in Prison gives inmates the skills necessary to support successful rehabilitation and reentry – and ultimately improves public safety. At the same time, it is an opportunity for the inmates to repay Arkansas communities and some of the debts caused by their crimes.”

Since she launched the program in December of 2011, she said the ADC has seen a positive impact on relations between inmates and staff, which ultimately improves security.

“We’ve begun training service dogs, too,” she said. “Some of these stories are truly inspirational. People in wheelchairs and autistic children have seen their lives greatly improved by the adoption of our dogs. Seeing this process and watching how it impacts the ones adopting dogs and the inmate trainers is incredible. These animals were literally on doggy death row until they came to us. This is about redemption and second chances for the dogs and the inmates.”

Hutchens-Wilson came to SAU the fall of 1986 with the idea of transferring later to a larger university, but she found a place of belonging on the Magnolia campus. And halfway through her college career, she married her sweetheart, David Wilson.

Her journalism career began at SAU where she worked for The Bray.

“SAU opened my eyes to the world,” said Hutchens-Wilson. “My college experience had a profound impact on my life and I made some wonderful friends there.”

A member of the Alpha Sigma Alpha sorority, Hutchens-Wilson divided her time between school work, sorority events and her job at The Bray.

“The Bray was where I landed between classes. I always loved the discussions and debates around the office and the hustle and bustle…and frustrations…of putting out a weekly college paper,” she said.