The Varsitonians: Playing Swing Music from the Club House to the Normandie 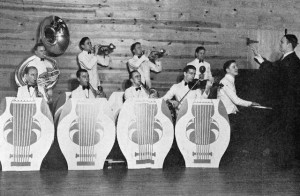 The Varsitonians, the Magnolia A&M and SSC swing band, for some 30 years brought Benny Goodman-style jazz and dance music to thousands of students and citizens of south Arkansas and, once, even to Paris, France.

Professor Haydon conducted summer tours for a Dallas travel agency and had many European contacts.

An international crisis added excitement just as the ship left New York on Sept. 14. German dictator Adolf Hitler threatened war unless permitted to annex much of Czechoslovakia. After a week at sea, during which the band played dance music four hours each evening, the ship reached France. The students hopped a train to Paris, a city making war preparations. The boys did not speak or read French and did not realize the magnitude of the danger until their return voyage. There was an overflow of passengers sailing for America to escape the expected conflict. Three days after the Normandie reached New York, the war scare passed when European leaders met Hitler at Munich and in an act of appeasement agreed to Nazi demands.

Marching band director James “Jimmy” Justiss later led the Varsitonians, but the group broke up when he and many A&M students left school for the Second World War. Student musicians, without a director, restarted the band in 1947. Joe Byrd played trombone; Homer Greer, trumpet; Charles Martel, bass; Bob Rosebaum, drums; Marion “Tootsie” Greer Schmidt, piano; and Jack Walker, saxophone. The next year Navy veteran Richard “Dick” Oliver, who had entertained troops fighting across the Pacific with his trumpet solos during radio broadcasts from Pearl Harbor, came to A&M as the new marching band director. Under Oliver’s direction, the Varsitonians reached the high point of the band’s history. During the 1950s the Southern State College Varsitonians featured some of the best horn men ever to play in the group, including Charles Colquitt, Bill and Jack Hardin, Jerry Horne, and others too numerous to mention.

Rock and roll brought an end to the Varsitonians. Local dances at the college and elsewhere increasingly used local rock bands like the “Cutups” (better known later with a hit record as the “Uniques”). As a stage band playing for college events, the Varsitonians lasted until the late 1960s before fading from the scene. Special thanks to Charles Colquitt, Homer Greer, and Ken Sibley for sharing memories of the Varsitonians. Information about the Normandie adventure came from pages of The Bray and other newspapers.

Dr. Willis continues to record memories of alumni for the SAU Archives. Alumni are urged to contact him at (870) 235-4223 or jfwillis@saumag.edu.