Big Opportunities in the Big Apple 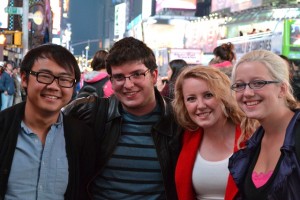 Southern Arkansas University theatre students recently had the opportunity to see what it is like in one of the world’s most competitive theatre markets in New York City.

The third annual Performance Project in October was far from a sightseeing trip. Each student had opportunities to work in their specific areas of interest and expertise.

This play festival brings together a group of professional actors, writers and directors to write and perform a dozen one-act plays in 24 hours. Terence Lee, a junior from Nepal, learned why the play festival is called Insomniacs. As an actor, he received his play’s freshly-written script at around 1 a.m. He said he chose reading his 10 pages of lines over sleep that night.

Caleb Carrier, junior from El Dorado, reveled at the chance to work beside a professional in light design.

“He was under a lot of pressure, but he spoke with all of the directors at the festival and was always very nice. He then went back to the light board and did in 30-minutes what usually takes a week to prepare the lights for each show. He showed me how he did it and the process of doing it,” said Carrier.

Kaylee Vance, senior from Texarkana, Ark., learned from her role as assistant to the producer at the play festival, but also had a lot to take away from the meetings arranged with professional actors during their trip. She said that even though Christopher Rice, of Broadway’s Book of Mormon, and Clay Thomson, of Broadway’s Matilda, had reached the pinnacle of theatre acting, they continue to push themselves.

“It is hard to convince people that theatre is legitimate,” said Vance. “They told us that people saying they could not [make it as actors] really motivated them. They joked that they want to go to those people and say, ‘In your face…I’m really successful.’”

SAU Theatre’s exciting play season will continue into the spring with Seussical the Musical, a performance that is sure to be fun for the whole family. Be sure to mark your new calendars for production dates of April 24-27, 2014. Curtain call will be at 7 p.m. each evening. Tickets can be purchased at www.showtix.com or by calling (870) 235-4256.

PrevPreviousAlong for the ride
NextBroadway performer acts in SAU playNext