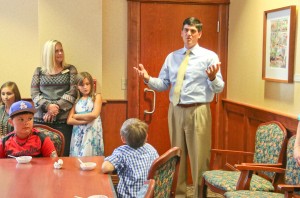 The new Magnolia School District Superintendent John Ward was welcomed to the community Monday before his official first day on July 1 at an ice cream social at SAU.

Ward earned his superintendent certification from SAU in 2008 and told the crowd of around 65 that he has appreciated the overwhelming welcome from the community and he looks forward to working closely with the University.

The “kids” Ward referred to, in part, were the distinguished speakers who preceded him in the program that included a variety of well-spoken third to tenth-grade Magnolia students.

Rankin expressed his outlook with a metaphor fit for the occasion.

“I think SAU and the Magnolia School District go together like vanilla ice cream and chocolate syrup,” said Rankin. “This is a time of celebration for new leadership and new opportunities, and we are proud to be a part of it.”

In 2007, Horatio School District hired Ward to lead their district as the superintendent. Under his leadership, the district successfully completed major construction projects, increased the fund balance and increased student achievement.

His wife, Misty, will also be working for Magnolia School District. She will be a literacy coach at East Side Elementary. The couple has four kids: Will, Caleb, Eli and Rachel.