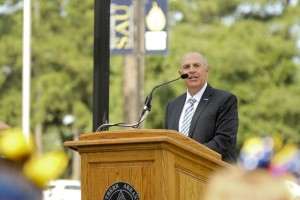 The Magnolia community and the Mulerider family came out to welcome Southern Arkansas University’s 12th President Dr. Trey Berry at a tree-planting ceremony on his first day in office.

Berry spoke under the shade of the picturesque pines in the front lawn of SAU’s Overstreet Hall to a crowd of around 150. He pointed to the turnout as a demonstration of the love that SAU holds in this community.

“Today is not about me, and the ceremony is not about me. Today we are honoring our past, our history,” said Berry. Berry said that the tree planting, and particularly the re-planting of SAU’s historic Lone Pine, served as a symbol of a collective future of SAU, the community, the region and South Arkansas. 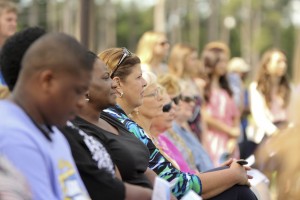 “As we watch [the Lone Pine] grow, we will be reminded of where we’ve come from and how far we have come, and this University has come, so far.”

Preceding Berry at the podium was Taylor McNeel, an SAU President’s Ambassador, who congratulated the new President on behalf of the SAU student body.

“Over the two years I’ve been a student at SAU, I’ve gotten to know somebody who has been a mentor and a supporter in my life,” McNeel said about Berry. “I’ve really gotten to know that Dr. Berry has a heart for the students here at SAU. He loves watching them succeed and he loves pouring every ounce of his effort into this University.”

Berry referenced a quote shared by McNeel from Isaac Newton – “I’ve seen further than others, it’s because I’m standing on the shoulders of giants.”

“We owe such a thanks and gratitude for all the previous presidents of the University for their dedication and experience, for what they have done for all of us, including Dr. David Rankin,” said Berry. 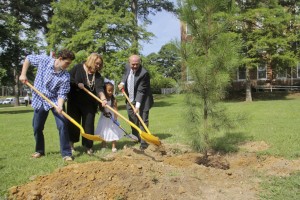 Following the brief ceremony, a dozen children hoisted small blue and gold Mulerider shovels to kick-off the planting of the eight-foot Lone Pine. Members of the SAU Board of Trustees joined Berry as the next group to toss dirt over the roots of the tree. Next was Berry with his family, including his wife, Dr. Katherine Simms Berry, son Tanner and daughter Berkeley.

Other community and SAU guests joined in on the ceremonial planting, which was reflective of Berry’s primary message of togetherness.

“We have to do this together. It takes all of us, all of the time,” said Berry. “The Berry family is committed to this hard work, dedication, and investment, but we also ask and covet your prayers and your thoughts as we all go on this journey together.”

Berry’s first day in office was a busy one. He had breakfast with the SAU Board of Trustees at 8:30 a.m., followed by the ceremony. At noon, he hosted a lunch with SAU’s Administrative Council before departing for SAU Tech, where he met with the vice chancellors. 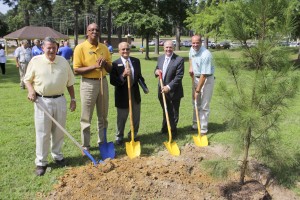 Berry joined SAU in 2011 as professor of history and dean of the College of Liberal and Performing Arts. He was promoted to provost and vice president for academic affairs a year later. Before coming to SAU, he spent two years as deputy director of the Department of Arkansas Heritage, two years as a dean at the University of Arkansas at Monticello, and 18 years as a faculty member and administrator at Ouachita Baptist University.

Building on his promise to focus on people, planning, programs, and philanthropy, Berry plans to “hit the ground listening.” He said that as president his personal leadership style will not change from that which the campus community has already grown accustomed.

Since first arriving at SAU four years ago, Berry has become active in the Magnolia community. He has served on the Board of Directors of the Magnolia-Columbia County Chamber of Commerce and the advisory board of the University of Arkansas for Medical Sciences – South since 2013. He has been a member of the Golden Triangle Economic Development Council Board of Directors since 2014, and is a member of the Rotary Club of Magnolia.