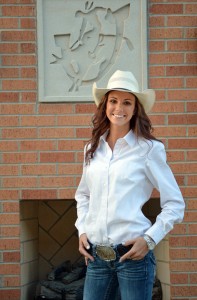 As if earning a spot in the College National Finals Rodeo five years in a row for Southern Arkansas University’s Loni Pearce was not enough, she became the goat tying national champion in her final trip to Casper, Wyoming, on June 20, 2015.

Pearce entered the short round in first place. Her final run of 6.8-seconds was best by a tenth of a second at the Casper Events Center on June 20, 2015. Media photographers captured her bright smile as she looked up from and saw her name and winning time on the scoreboard.

“I had no idea what I really needed to be, I just knew I had to go out there and make the best run I could make and it worked,” said an out-of-breath Pearce to reporters immediately after her winning run.

Pearce earned her way to Casper her freshman through junior years by finishing the Ozark Region season in third place. She finished first in the region
both her senior year as an undergraduate and this year as a graduate student at SAU.

According to SAU’s Rodeo Coach Rusty Hayes, Pearce is the only rodeo team member in the history of the University to go to the national finals five times.

“What I try to press upon each student that comes to SAU and our rodeo program is that we will give you the opportunity to succeed, in the classroom and arena,” said Hayes. “Loni exemplifies what can happen if a student puts forth the effort. She has an Agriculture Business degree, will graduate with a master’s degree, earned regional rodeo titles and a national rodeo title.”

Pearce explained that she learned from her previous trips and entered this year’s finals more prepared mentally. She also gave a lot of credit to Ray, her horse.

“This year I had the same horse all year and at the finals. We made a good team,” said Pearce.

Ray was on loan to Pearce from her boyfriend, TyDaniel Haller, who also had an eventful spring as he earned a degree from SAU as well as a spot in the national finals in team roping.

“I won the college finals on a calf roping horse,” said Pearce. “For everyone who knows rodeo, horses are not supposed to be good at roping calves and at tying
goats. It’s cool that Ray knows the difference because he keeps running for me rather than stopping immediately like he’s trained to do in calf roping.”

Even though Ray was a big part of her finals run, she admitted she would definitely have not become a champion without Coach Hayes.

“He really has supported me from day one. He has always believed in me, and I want to thank him for supporting me 100%.”

Pearce followed her heart to SAU from Venus, Florida, saying that Hayes’ rodeo scholarship offer helped, but that she just fell in love with SAU when she came to visit campus. She had visited other universities, but she said she felt at home at SAU. The rodeo facilities were outstanding, too, she added.

Since Pearce has been at SAU, she has witnessed the rodeo facilities dramatically change with the addition of the $4.4 million Story Arena, which had its grand
opening on November 6, 2014. She also got to enjoy the first year of SAU’s new 30,557 square-foot Agriculture Center, which opened the spring semester of 2013.

She is slated to complete her online graduate degree in agriculture from SAU in December. Haller plans to follow suit and begin the same master’s program in the fall. He is currently handmaking jewelry and saddle conchos for Rockin’ Out Jewelry.

For Pearce, she is not sure what the future holds. For now, her job at a veterinary clinic in Decatur, Texas, is a good fit for her and she loves it. In the end, being in Decatur just feels right, and her heart has certainly led her well in the past.

“The rodeo world is huge, but it’s a small world at the same time. Since I moved out here, it seems everyone’s connected in some sort of way. I’m getting to know all the right people and getting my foot in the door with some bigger companies.”