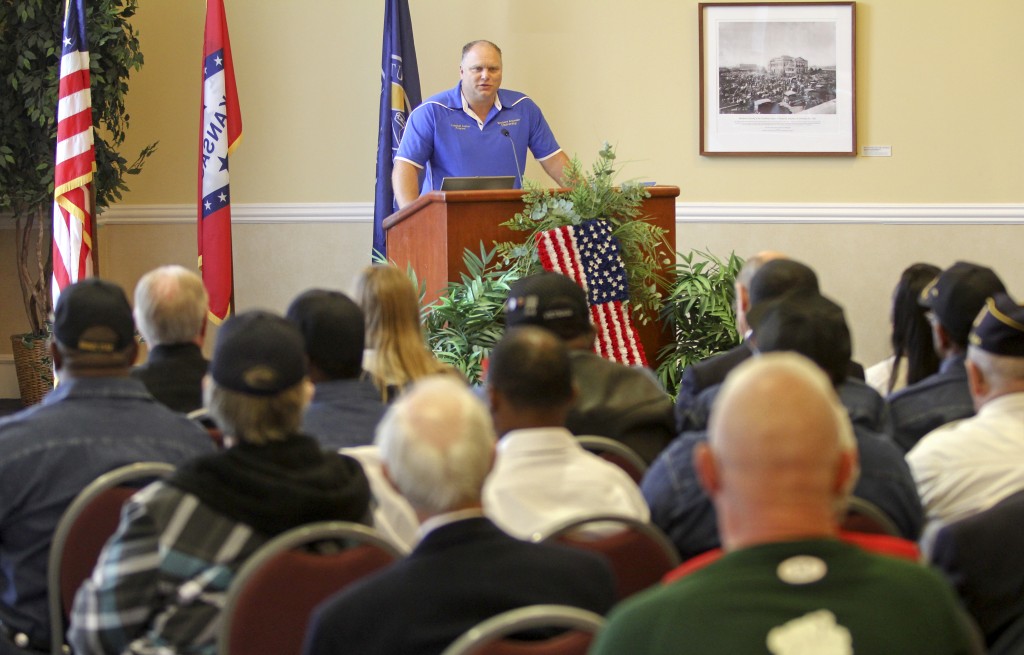 Louis Roy, a veteran of the U.S. Marine Corp., speaks at the November 11 Veterans Day program at SAU’s Grand Hall.

SAU’s new assistant professor of criminal justice, Louis Roy, started his teaching career in the Marines as an explosives instructor. He has ignited the SAU criminal justice program with his energy, ideas, and initiatives, including a week-long criminal justice youth academy coming in the summer.

From June 7-13, 2015, a total of 40 applicants will partake in SAU’s first Youth Criminal Justice Residential Academy. The cadets will be divided into five-member teams for the week’s learning competitions, and each member of the winning team will earn a $500 scholarship to SAU.

“We are looking for potential criminal justice leaders, students who will one day work in your departments,” said Roy during a meeting on December 16 with area law enforcement officials. The department representatives offered assistance in judging, demonstrations, and equipment for the academy.

Roy said that the cadets are always supervised and are active each day from 6 a.m. to 11 p.m. Some of the activities that cadets can look forward to include a SWAT team demo, police K-9 demo, CPR and first-aid training, arrest and cuffing demo, scuba diving training, a marksman competition, and a crime scene investigation (CSI) competition.

Roy has hosted four similar academies while he was the Criminal Justice program director at West Virginia University. The application process is competitive, and students who apply need to meet the following requirements: 14-18 years of age; have a “C” average or higher on last report card; no police record; recommendation letter from school, law enforcement officer, or a community leader; willingness to work as a team member; and an interest in the criminal justice field.

The student fee for the academy is $200, which Roy said covers their room and board. Applications are available by contacting Roy at lcroy@saumag.edu or (870) 235-4226.

Roy has estimated the total cost of the academy at more than $20,000, which is not covered by the cadet fees. He is seeking donations, which are tax deductible through the SAU Foundation.

Since starting at SAU, Roy has also established a Mulerider Marksmen Team and been an active mentor for the Criminal Justice Club. Roy said that there is a trend for universities starting marksmanship teams because it provides students safe, supervised, and professional training with firearms. The Mulerider Marksmen team has also completed community service work, including cleaning the Magnolia City Firing Range.

Roy also orchestrated a murder mystery fundraising dinner to raise money for the Criminal Justice Club to travel to a regional conference in Denton, Texas, in November. More than 100 people attended the fundraiser, and Roy said he was very proud of the amount of work and professionalism shown by the students, as well as the amount of support shown by the community.

“This is the first conference the SAU Criminal Justice Club has ever attended, and to finish this well shows how hard the students worked and prepared. In March, they will travel to Nashville, TN, to compete in national conference competitions. They are already preparing,” said Roy.

SAU has also been selected to host the American Criminal Justice Association Regional Conference in November 2015. Students from colleges/universities from Arkansas, Louisiana, Texas, New Mexico, Arizona, and Oklahoma will be coming to SAU for this conference.

“We are excited to have this opportunity to showcase our wonderful campus and program.”

Following service in the Marines, Roy worked in law enforcement for more than 20 years, where he held numerous law enforcement positions from patrol officer to captain. He is a trained hostage negotiator, crime scene investigator, crime scene imaging instructor, and firearms instructor. He received his bachelor’s and master’s degrees from Mountain State University in Criminal Justice, and is completing his PhD in Public Administration/Criminal Justice at Walden University.