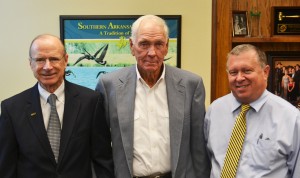 SAU’s farming operation is growing again, this time with the gift of approximately 400 acres of crop land in southern Lafayette County.

Ted Jackson Monroe, Sr., of Bradley recently transferred ownership of the farm land to a private trust which will be managed by the University, and SAU students and farm employees are already planning for the first crops.

“The students are more excited about this than anything we’ve done since I’ve been here,” said Director of Farm Operations Rusty Hayes who noted that the experience is a first for most students.

Hayes said the property is equipped with large grain handling systems and irrigation equipment that will greatly enhance the University’s ability to teach row crop farming to a new generation of students. Founded as an agricultural school in 1909, SAU students once row cropped on the Magnolia campus, but Hayes said it had been decades since the practice had taken place on a large scale.

About 15 SAU students along with Assistant Director of Farm Operations Bart Emerson will work the new farm land. Plans call for some 300 acres of soybeans with wheat being a secondary crop. Proceeds from the harvests will help fund farming operations at SAU.

“We are very grateful for the tremendous generosity of Mr. Monroe,” said SAU President Dr. David Rankin. “This gift allows Southern Arkansas University agriculture students, for the first time ever, to be involved in Red River delta row-crop farming. Mr. Monroe’s support for the University will affect the lives of students for decades to come.”

Rankin said he was also grateful for the assistance of Dr. David Ashby, People’s Bank professor of finance at SAU, in working with Monroe on the arrangement of the gift.

“We are excited about the opportunities this acquisition will provide for our agriculture students, said Dr. Trey Berry, provost and vice president for academic affairs. “It is our hope that the new farm will also serve as a laboratory and experimental learning center for SAU and provide our students with hands-on experiences in row crop science and management.”

This is the second time in recent history that the SAU farm has gained a large amount of acreage. In 2005, the University acquired the 652 acre Gov. Ben T. Laney farm, located a half-mile north of the main campus. The Laney farm addition brought the University’s main campus to 1,418 acres, most of which is used for farming.

The University’s farming operations have varied over time. In recent years, beef cattle have been the primary focus on the main campus farm where there are registered Hereford and Brangus herds.