SAU top 10 in South for game design and development programs 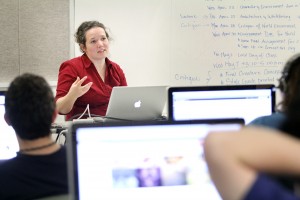 SAU was recently ranked among the top 10 universities in the South for aspiring game designers and developers by Animation Career Review thanks to its two animation and game development academic programs.

“We are very happy to hear of this new ranking,” said SAU President Dr. Trey Berry. “The game design majors at SAU are two of the fastest growing areas of study on our campus, and we are proud of the dedication of our faculty and staff members who are helping us progress these exciting programs.”

Rhaelene Lowther, assistant professor for the B.F.A. game design program, has seen firsthand how these new programs at SAU have developed, and she gives a lot of credit to the students. 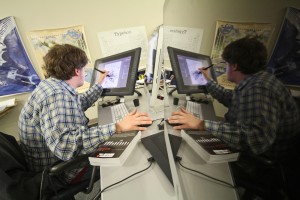 O’Neal and Hardy also teamed up and won first place for their poster outlining their educational game board design at the Mid-South Undergraduate Research Conference in the spring. Their poster was also accepted and will be presented at the National Honors Conference in Chicago this fall.

Another of the art game development students, senior Tara Massey of Camden, has already published a small educational game online. The game is called “Bully Color Breakdown,” and it allows users to explore dog color genetics, specifically those that commonly occur in the American Bully breed.

Lowther said that her students worked this past academic year on learning game mechanics and design by creating board games. They have also begun learning 3-D modeling in Maya and learning animation principles through traditional animation.

To add to their learning experience, Lowther invited several industry professionals to visit SAU last year, and even more are coming for 2015-16. Two animators are already scheduled for the fall, and one will be offering a workshop during his visit. A Skype Discussion Program is also being established so that more pros can give presentations and do Q&A’s with students. Lowther was excited to have an animator from Utah and a game designer from New York City Skype with the students last year.

Lowther’s vision for this next year and beyond includes the creation of a Women in Gaming Technology Symposium. She also will continue to foster industry connections and gain internships and other industry support from the region. Academically in 2015-16, she plans to work with her students more on 3-D animation and 3-D modeling and sculpting.