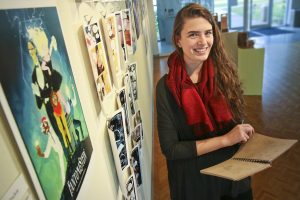 Beka Duke lived around the world growing up and shied away from her true calling as she progressed in school, but she has now found a home at SAU and is drawing national attention for her artwork.

Duke recently earned a spot on an elite list of finalists for Comic Alliance’s “Best New WebComic for 2015” with her comic series “Fantome-Stein.” After the panel of judges deliberated the readers voted, Duke was honored as a Runner-Up for her work.

“Everything about this comic, written and drawn by Beka Duke, is drenched in atmosphere, with thick scratchy inks, bold lettering with perfectly chosen fonts, and desaturated colors wringing the operatic melodrama for all that it’s worth,” wrote the Comic Alliance judges in their announcement on December 21, 2015.

Duke is a junior studying Game and Animation Design and Communication Design at SAU. The college student and aspiring story artist explains that “Fantome-Stein” explores the idea that Frankenstein’s creation did not die, but rather lived on to become the Phantom of the Opera. She said it started as a bit of a joke, but went on to be a full-fledged comic, school product, and part-time job that she devotes “a truly embarrassing amount of time” creating.

“The story follows Frankenstein’s Creature and his continued struggle to find humanity as he attempts to win the affections of Christine Daae. The story is woven, or ‘stitched’ if you will, from the narratives of Mary Shelley’s original novel and Gaston Leroux’s spooky masterpiece,” Duke describes.

Duke came to SAU in the fall of 2014, and by the following spring Stout was encouraging her to give the comic book genre a go. Having been frustrated by earlier attempts, she passed until the idea of “Fantome-Stein” came to her.

“I had to write Mr. Stout an email over the summer and tell him he was right,” she joked.

She credits Stout, too, for being “really chill” and letting her develop “Fantome-Stein” for credit on class projects. She is excited to continue to delve into her comic’s storyline and artistry in next semester’s Graphic Novels class.

She said that fans have charted the evolution of the comic since it started, saying that the increased use of color has dramatically changed the look of her story. And as the story has expanded, so has her fan base. Her “Fantome-Stein” merchandise has sold out of her online Etsy store, but she hopes to catch up with her custom drawings and watercolors over the holiday break. She also has had to balance her school work being on the road to host “Fantome-Stein” promotional booths at expos and conventions.

She admits this is quite a trip, admitting that she’s still not completely confident about her art. It was only a couple of years ago she came out as an artist. Again she credits encouragement from professors steering her toward her natural talents while she was completing her Associates of Liberal Arts and Culture at New Saint Andrews College in Moscow, Idaho.

“I was shy about my artwork, but I would take every chance I got to draw sketches and scenes on my essays,” she said, remembering that her artistry for her analysis on Aesop’s Fables really caught her teacher’s attention.

She is no stranger to being in the spotlight, though, as she grew up the eldest daughter of seven of a Marine Corp. Military Attaché assigned to the U.S. Consulate in Jerusalem.

Her experiences in Israel opened her up to different types of people and situations. As such, “Fantome-Stein” has a lot of inspiration from Israeli and Middle-Eastern culture. And even though her parents, Darren and Maggie, are “still really confused about the whole comic situation,” her father gladly gives her cultural and historical insights upon request as he is fluent in Arabic, Hebrew and French.

Duke is not sure where this journey will take her, but she is hopeful that “Fantome-Stein” will get published one day. Until then, she is going to continue enjoying the experience and popularity of her creation. She is online as @thedrawingduke on Twitter, Instagram, Facebook and Tumblr at http://fantome-stein.tumblr.com/.

While at SAU, she is residing with her grandparents in Magnolia, Darrell “Grand Daddy” and Diana “Nana” Duke.