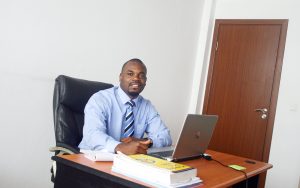 Armed with an MBA degree, an ability to focus and complete any task, and a kindhearted and sincere personality, Glenn Muffih could have gotten a ticket to anywhere to establish a life and career.  His heart put him on a plane to Cameroon.

Merely months after earning his MBA from the Rankin College of Business (RCB) at Southern Arkansas University, Muffih is fulfilling his dream of using his education to give back to his home country on the west coast of Africa.  He has quickly found meaningful work utilizing the supply chain management skills he picked up at the RCB to provide medications to mothers and children in dire need. He is the program Supply Chain Officer with the eMTCT project (Elimination of Mother to Child Transmission of HIV) with the Clinton Health Access Initiative (CHAI).

“My job is to ensure that pregnant women and children in Cameroon living with HIV have a continuous supply of HIV commodities,” said Muffih. “It is demanding work and I’m glad I was able to have attained a firm foundation on supply chain management from SAU. The projects and cases we did at SAU’s MBA program have really helped me a lot because they prepared me for the real world.”

Muffih said his day-to-day duties in the capital city of Cameroon, Yaounde, include improving stock management systems, coordinating with other partners, and capacitating health workers to develop accurate forecasting and efficient supply chain systems for HIV commodities. He said he is still learning a lot on the job, but his experiences at SAU have helped him cope with the demands and responsibilities of his career.

“One of the best parts of being an educator is seeing our graduates live out their dreams. For Glenn, it was always his hope to return to his country and have an effect on the lives of the people there. Needless to say, he has accomplished that goal,” said Dr. Lisa Toms, dean of the Rankin College of Business at SAU. “We are so proud of him and know that he will continue to be the successful, caring person we knew as our student.”

Muffih earned his undergraduate degree from SAU in 2013 and continued straight into the MBA program, which had recently added an emphasis in supply chain management.

According to Toms, RCB graduates who have completed coursework or an emphasis in supply chain management have experienced lucrative job opportunities. Forbes reports that the “behind the scenes” but giant U.S. logistics business already employs around 6 million people, and by 2018 “will be looking to fill about 1.4 million” supply chain management jobs, averaging around 270,000 new positions a year. And as Muffih’s case proves, SCM skills are needed across the globe.

The eMTCT program is one of five health projects for the Clinton Health Access Initiative (CHAI) in Cameroon. The others include targeting malaria, vaccines, family planning, and health financing. CHAI is a global health organization committed to strengthening integrated health systems and expanding access to care and treatment in the developing world.

Muffih got his foot in the door at CHAI for a summer internship while he was getting his education. He made such an impression that he left with a secure job opportunity waiting for him once he completed his studies.

He did not put off getting involved in community for after graduation. He was a part of SAU’s new Making Magnolia Blossom (MMB) community organization since its inception. When not studying or working on projects in the MBA program, Muffih worked as a graduate assistant at SAU’s University Marketing and Communications Department. Beyond his regular hours in the office helping distribute news stories and other duties, Muffih volunteered at every MMB cleanup event and helped in planning and supervising.

His craving for giving back comes naturally as Muffih is following in the footsteps of his father, who sought out a university education in Boston and returned to Cameroon to make an impact. Tih Pius Muffih, MPH, PhD, is the director of the Cameroon Baptist Convention Health Board (CBCHB). The CBCHB is a faith-based organization that provides health services through six hospitals, 26 integrated health centers and 50 primary health centers in six of the 10 regions in Cameroon. The CBCHB also runs a comprehensive HIV and AIDS program.

The Rankin College of Business is accredited with AACSB International, making it among the world’s top five percent of business schools. SAU maintains this level of quality while minimizing costs to the students. SAU is the most affordable university in Arkansas and the sixth most affordable small college in the U.S., according to BestValueColleges.com. As such, it’s no surprise that SAU was the fastest growing university in Arkansas in 2015.