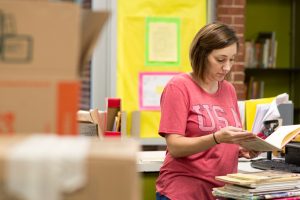 The concept of a “makeover” should be familiar to watchers of reality TV. In that context, a makeover can transform a less-than-desirable house into a hot property. In the field of library science, however, it can make learning more fun for students.

Recently, the Upper Lafayette County Elementary School Library received a makeover at the hands of 15 licensed teachers pursuing their master’s in the Library Media Information Specialist program at Southern Arkansas University. Vanda Crank, a 2006 graduate of the program, is in her first year as director of LMIS.

“The program is for teachers who are already licensed but decide they want to work on their master’s,” Crank said. “The focus is on working in a public school library, and anyone who completes it then has the (qualifications) to work in a P-12 library.”

Most of the hours can be taken online, Crank said, but there are four classes in a rotation of two per summer session that meet on campus. “The students come and live in the apartments on campus for a week,” she said. “They start on a Sunday and end on a Friday and can complete the course in one week. We try at least once a summer to do a library makeover project.”

In June, the class studied Collection Management and Development, which covers collaborative planning, policy making, and a process known as “weeding,” about which the students receive first-hand knowledge via makeover.

“We spent a total of four days doing a library makeover at Parkers Chapel Elementary,” Crank said. “The new librarian there had completed the program at SAU as well.”

In July, the class studied Management and Evaluation of programs but did plenty of weeding. Aside from what someone may do in their flower garden, what is “weeding”? “That is going through a library and deciding whether a book is in poor condition or contains outdated information, or information that can be found in newer editions, and pulling those books off the shelves,” Crank said. “It is part of their classwork – they learn how to weed. We especially look for outdated information in non-fiction books. Information changes so quickly, especially about technology, that you don’t want an old book on your shelf.”

In addition to being physically pulled from shelves, books that get weeded out also have their information scrubbed from a library’s automated system.

“We also rearrange the placement of fiction and non-fiction to make a better flow for student access,” Crank said. “We decorate, we design floorplans … it’s like something you see on a reality show. One of my students said, ‘Can we just quit our jobs and have a reality TV show and call it ‘Library Makeover’?”

Typically, only one makeover is done, but this summer Crank opted for two.

“One of my current students, Megan Bevins, was hired in June to be the new librarian here at Lafayette County Elementary School,” Crank said. “So I thought it would be really awesome if we could help her.”

At the lower K-2 library the SAU graduate students redecorated, reorganized and added material and paper to the walls to make the space feel “more contemporary.” At the Upper library the emphasis is on organizing the books.

“There are books in every corner, every storage room. Some look like they are old and need to be discarded, some look brand new. My office was so cramped I could barely fit. Right now, we’re on Day 1, so everybody has a different job. They’re weeding fiction, putting nonfiction in order, adding Accelerated Reader labels … we’re able to get a lot done.”

Bevins, who graduates next year, said she “panicked” when she first saw the disorganization. “There was no way I could have done this by myself. It would have taken me a year minimum to get it all done. It’s nice having (LMIS) help me, so I can focus on lessons with my students and helping my teachers. I have time for them as opposed to just organizing the library.”

Janet Holzhauer, principal of Lafayette County Elementary School, said she received her master’s in LMIS from SAU in 1993. A native of Louisiana, she said she moved to Magnolia to participate in the program. Since then, she has served as a library media specialist in Gravette, Ark., and in the former Acorn School District (near Mena, Ark.). Her LMIS class sent her to McNeil School District for a makeover. “We threw away tons of things in that library,” she said.

“The librarian usually does not have time to weed,” Crank said. “So things just get left on the shelf year after year. Librarians are teachers. People think they just check out books, but they have curriculum frameworks and standards, and they teach all day long.” Crank worked as a library media specialist in Magnolia Public Schools herself before joining the LMIS program as director.

Amy Curtis lives near Mountain Home, Ark., and has traveled the longest distance to attend the intensive weeklong course at SAU. She made the decision to pursue the LMIS master’s because “I could afford it and it was the best fit,” Curtis said.

Curtis, a K-12 library media specialist, currently drives an hour to her job in the Lead Hill School District, which is south of Branson, Mo. She said she is already using many of the concepts in the class “back home, but this emphasizes whether I’m doing it right or wrong. I’m the fourth librarian in four years; each one slowly weeded things out but I’m still finding stuff and throwing it away.”

Holzhauer said that since she graduated the program, “automation has been the biggest change.” Bar-code scanning and the elimination of the old card system represent two leaps in technology “we didn’t have before.”

“The first four years I was a librarian, we had cards,” she said. “I automated two libraries in four years. The first one was very hard, but it got progressively easier. It took a year to do the first one.”

Crank said another change in the past 20 years has been “information access. So much is online now. You don’t see any more World Book Encyclopedias, and if you do, you shouldn’t.”

“We’re still fighting the mindset that if you do research, you have to have a print resource,” Curtis said. “Most of that is now e-resource. That’s a big part of a librarian’s job – changing that mindset. These databases are geared toward our students and we need to utilize them.”

Crank said digital citizenship is also taught to students. “We teach proper ways of using social networking and those types of websites. How to evaluate an online resource to determine if it’s accurate? Students think, ‘It says it on the Internet so it’s got to be true.’”

Online and digital resources seem to have overpowered traditional print, but Curtis said books will always be part of libraries.

“Media didn’t get rid of books. Media has been added,” she said. “We’re still adjusting to this influx of information. Books – reading – will always remain.”

She said librarians have to work a little harder to gain students’ interest. “Give them a place to feel at home, to feel safe and secure, and they will come. When you draw them in, say, ‘You know, this is a book you’d love.’ You get their interest. ‘You like that story? Come here, will you trust me for five pages?’”

Crank said media information specialists also assist teachers with supplemental materials, print or non-print. “The bottom line is enhancing student learning,” she said. “If that is through academics, the librarian can support that.”