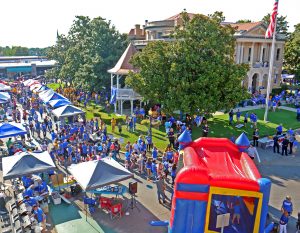 The buzz about SAU’s growth and successes spread across Arkansas and the nation this past fall as SAU became the fastest growing university in the state and earned new accolades for quality and affordability.

For the third straight year and in dramatic fashion, SAU posted several student enrollment records. This year’s total student count is an increase of more than 16.7 percent over last fall’s record enrollment.

“It is a great time to be at SAU! You can feel the excitement and energy on campus,” said SAU’s new President Dr. Trey Berry. “Students are being attracted to SAU because of our rich and often unique academic programs, our affordability, and our increasing reputation as a caring institution.”

Over the past few years, SAU has established several new and unique programs that are proving popular in the region. SAU engineering, which launched fall 2013, already has an enrollment this fall of 172 students. SAU’s Game Development and Animation Design programs have attracted 66 students to Magnolia. Marine Biology is also growing with 17 declared majors.

SAU’s balance of affordability and quality has caught the attention of national higher education publications with several regional and national recognitions. SAU was ranked sixth in the nation for affordability among small universities by BestValueSchools.com. The U.S. Department of Education also released data showing SAU not only as the most affordable university in Arkansas, but also that SAU graduates get the highest return on their higher education investment than alumni from other universities in the state. Brookings.edu found SAU to be the highest ranked public university in Arkansas based on their measurement of the contribution of colleges to student outcomes.

“These are national recognitions of our earnest attempts over the years to keep our educational costs affordable,” said Berry. “We hope this will resonate with students and parents that SAU is a place where they can receive a top quality education at a price that is very reasonable.”

SAU’s Dean of Enrollment Services Sarah Jennings was finally able to breathe a sigh of relief on the 11th class day. For her, the best part of the growth at SAU is that it will mean continued development in the University’s academic programs, campus life activities and learning experiences for Mulerider students. She and her team of recruiters have been an important ingredient in SAU’s recipe for growth and improvement, and they have already hit the road to talk to prospects for next year’s class.

“Everyone has done an excellent job recruiting outstanding students, providing the tools and facilities necessary for success, and helping them achieve success,” said SAU’s Vice President for Student Affairs Dr. Donna Allen. “I am so proud to have the opportunity to work with such an excited and qualified new group of students and thankful to work with such fine, committed fellow employees. It’s a great day to be a Mulerider!”

The surrounding community is also excited about the energy at SAU and all the things that have attracted more students. The day before classes started on August 25, more than 3,000 community members, new and returning SAU students, and SAU faculty and staff gathered in downtown Magnolia for a Blue and Gold Day rally. A sea of blue and gold citizens welcomed the students, merchants offered discounts and giveaways, and there was music, food and fun. Seeing how the event was considered a success by all accounts and how SAU and the community are teaming together for continued growth, Blue and Gold Day organizers have already started looking into another Blue and Gold Day event next fall.

Thanks to the steady enrollment growth over the past several years, construction is well underway for a new residence hall project to have more rooms ready for fall 2016. Ground was broken for the two new residence halls, Magnolia and Columbia, on October 30.

“We have been bursting at the seams and we feel the time is right for new halls. They are essential parts to our future growth.” said SAU President Dr. Trey Berry.

Other construction projects taking place are a $1 million track and field facility and a $1 million expansion to the Mulerider Softball Complex.