Alexander and Ozmer homes relocated to new ‘farmstead’ at SAU 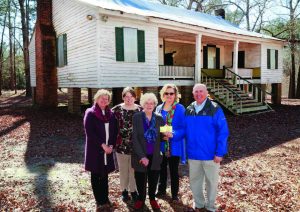 Showcasing the transformation of farming from a local to a commercial practice is one goal of the relocation and renovation of two historic Columbia County homes, the Ozmer House and the Alexander House.

Together they are a prominent feature of Southern Arkansas University and will form a working farmstead in the heart of the campus, Dr. Trey Berry, SAU president, said.

The University received a state grant from the Arkansas Natural and Cultural Resources Council totaling $150,000 to renovate the Ozmer House. Along with the grant, the Ozmer family contributed $40,000 to meet the total project cost of $190,000.

The Ozmer House was built circa 1883 and is on the National Register of Historic Places. According to University Archives, alumnus W. Derrell Rogers donated the house to SAU in 1986. Its original location was near the intersection of highways 82 and 79, but it was relocated to the eastern boundary of the SAU farm. In November 2016, the house was carefully moved to a new site facing Washington Street between Childs Hall and the Agriculture Center where refurbishing work has already begun.

The Alexander House, built in the 1850s, was moved from its former location 10.5 miles east of Magnolia to the heart of SAU. It will join the historic Ozmer House as a prominent feature of the campus and honor a family proud of its Columbia County roots. The two houses tell of a remarkable period in Arkansas history, sharing the families’ stories while exhibiting early practices of the rural farmer.

Berry said the Ozmer House Farmstead would include restoring the house to its original appearance. When complete, the house will have a small classroom as well as exhibit spaces that will include the history of the Ozmer family.

The Ozmer family migrated to Columbia County in 1860 from Georgia by way of Alabama. In 1873, Henry Ozmer married Virginia Faulk and moved into a log house near the site of their future home until 1883, when Henry built the dogtrot house on farmland the family cleared and cultivated. Henry and Virginia lived in the house until his death in 1941.

The Alexander House was constructed by Sam Alexander shortly after he moved to Arkansas in the early 1850s. He and his wife, Mary Brumfield Alexander; his mother, Annie Alexander, and children came to Arkansas from South Carolina by way of Mississippi. They settled on about 400 acres near a natural spring. They raised milk cows, goats, sheep, fowl, turkeys, chickens and geese. A cotton and corn farmer, Sam first built a small log cabin for the family while the larger dogtrot was constructed over several years. Once finished, the Alexander dogtrot was impressively large for one built in that period. It included six rooms, an attic, a detached kitchen (25 yards from the house) and the historic breezeway. Two striking architectural details were its five-foot height off the ground as well as steps off the front-and-back porches. These featured beautifully curved stairwells near ground level.

In the century following, the dogtrot continued to serve as a homestead for Sam Alexander’s descendants. It also proved a popular site for socials, weddings, family gatherings and parties. Sam’s daughter, Frances, and her husband, R.S. Warnock, bought the house from the heirs and worked to preserve the homestead. In 1954, R.S. Warnock Jr., son of R.S. “Bob” Warnock, acquired the title to the house and had the dogtrot fully restored.

The Ozmer family exhibit will display furniture the family donated to the University, as well as items the family might still have in their possession.
Work outside the Ozmer house will include landscaping and adding traditional farmstead picket fences, as well as fencing for small and large livestock areas. A single-crib barn will also be constructed with heavy timber to include a lean-to on the north side.

As there is no room in the historic house for public toilets, plans include construction of a detached kitchen to serve as modern, handicap-accessible toilets. The kitchen will be located near the back porch of the house and visitors will be connected to the front of the house with a sidewalk. There will be a smokehouse to serve as a storage building for yard tools, a chicken house with nesting boxes, a stone well, a goat pen, and a traditional boardwalk.

Of particular interest will be the inclusion of beehives on the farmstead. Beehives occasionally appeared on large farms and plantations, and beekeeping can be traced back to the early Egyptians. The rural farmer in the 19th century benefited not only from the honey that was harvested from moveable comb hives, but the presence of the bees helped cross-pollinate flowering crops, fruit-bearing trees and other flowering plants.