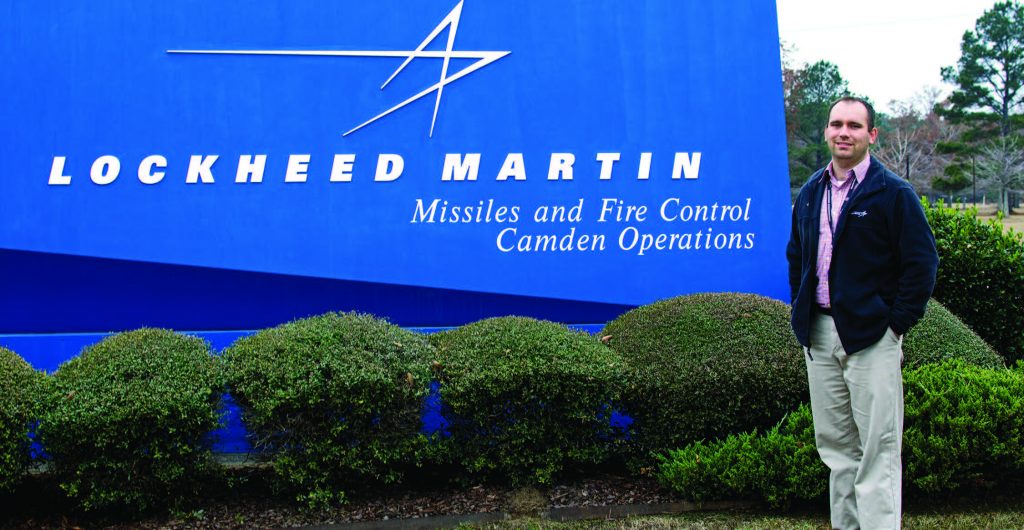 As the first graduate of the MBA program at Southern Arkansas University, Zach Rogers has experienced firsthand the benefit of having a master’s degree.

“Having the master’s made a very big difference,” Rogers, financial analyst for Lockheed Martin in Camden, said. “Several qualified candidates who had bachelor’s degrees interviewed, some from prestigious universities, but having the master’s very much made the difference for me, especially in pay. I know that my boss mentioned to me that because I came in with a master’s, I was able to start at a Level Two, which meant a fairly sizable increase in salary right off the bat.”

Rogers completed his undergraduate degree in business at SAU in 2008 and finished his MBA online just a year later. “I went straight into the MBA program the first semester classes were offered,” he said. “I only had a part-time job, so I decided to pursue the accelerated track, so that I could finish in one year.”
“As far as being the first to graduate from the program, it was a matter of timing,” he said. “I feel honored to be among the first to graduate. I know that Dr. Lisa Toms and the rest of the faculty worked tirelessly to bring the program to SAU.”

The MBA is offered by the Rankin College of Business and is fully accredited by AACSB International, the premier accrediting body for colleges and schools of business. A student can choose to complete courses in a traditional night program, through online delivery, or through a combination of the two.

Flexibility along with “the low cost of attendance” allowed Rogers the option to pursue the one-year track. “The course load was definitely challenging,” he said. “Managing your time well is extremely important. For the fall and spring sessions, I took two in-class courses and two online. During both summer sessions, I took one in-class course.”

A Camden native, Rogers said he chose SAU due to its “combination of location, affordability, and its College of Business being considered one of the best in the state.”

He spoke of the quality of the programs and teaching he received at SAU.

“The number of team projects was much higher (in the graduate program) compared to the BBA, which proved to be extremely helpful since I now work in a team environment. In BBA classes, you learn about the fundamentals, the definitions, the formulas, and basic application of business principles. In MBA classes, you have to think like a manager. ‘How does this impact my company’s bottom line? Will this deliver greater results for my department?’”

At Lockheed Martin, where he has worked since December 2009, Rogers “does a lot of budgeting, estimating, cost-tracking, present-value and time-value equations, all studied at SAU. From an accounting standpoint, we don’t deal too much with general ledgers but we still have to be aware of the principles behind it so we can make the right decisions on the job.”

Rogers described Lockheed Martin as an “excellent place to work, I’m very happy with it. We have several SAU grads working for us.”

He said that even though it was new while he was a student, the MBA program at SAU “ran very smoothly” and “I would absolutely recommend it. I’ve had several friends attend the business school at SAU and they all had positive experiences.”