SAU Business Building Endowment initiated in honor of the Blanchards 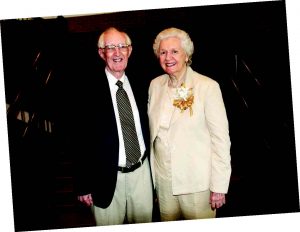 With the help of many of his “co-conspirators,” Dr. Trey Berry, president of Southern Arkansas University, was able to surprise Martha and Louis Blanchard with the unveiling of the new name on the side of SAU’s Business Building.

“From this day, Aug. 26, 2017, this facility will always carry your name – the Martha and Louis Blanchard Business Building,” Berry said, to a large crowd that gathered Saturday morning to surprise the Blanchards, who are much admired and respected by the SAU community.

The unveiling ceremony took place “despite a hurricane,” Dr. Berry said as intermittent showers fell. The Blanchards arrived at noon via golf cart following a meeting they attended on campus. Prior to their arrival, many friends and supporters gathered outside the Business Building to participate in the salute to the Blanchards and congratulate them on the naming of the building, which is home of the Rankin College of Business.

Louis Blanchard began his association with SAU in September 1956 as instructor of accounting, reaching the rank of professor in 1974. On July 1, 2001, Blanchard was appointed as the University’s interim president and served in that capacity until Dec. 31, 2001. Originally from Senatobia, Mississippi, he earned his B.B.A. and M.B.A. from the University of Mississippi. He is a certified public accountant. The Louis J. Blanchard Endowed Scholarship at SAU was established in 1985 by friends and alumni. In 1989, while serving as professor of accounting and chair of the Department of Accounting, Blanchard was selected by his peers as Honor Professor. A fully-endowed Louis J. Blanchard Professorship in Accounting was established in 1999. He received the distinguished title of Professor Emeritus in May 2001.

Berry called Saturday’s unveiling ceremony “a great way to honor two special people in the lives of our colleagues and students.” 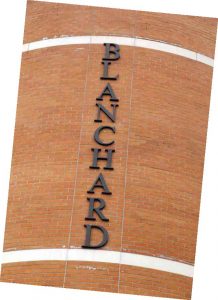 He said that whenever he and Josh Kee, vice president for development, “talk to our alumni and friends, literally all over the country, about the teachers who influenced them, we hear a lot of names … but without a doubt, the name we hear more than any other is Blanchard.”

He referenced the Christmas classic “It’s a Wonderful Life,” in which the angel Clarence tells George Bailey “no man is a failure who has friends.” He asked the Blanchards to “look around you – you are some of the most successful people that we know.”

Berry said that while walking into Overstreet Hall one recent afternoon with Louis Blanchard, “Louis said, ‘I wish everybody loved SAU the way I do. I love this place so much.’ We have been thinking long and hard about how we’re going to show our love for you.”

Berry recounted how “the whole city of Magnolia has kept this a secret, and it has been a remarkable thing to watch. The Board of Trustees has not yet passed a resolution because that would have to be public, but they will pass a resolution.”

After a brief countdown, a veil was removed from the Jackson Street side of the building, and the crowd applauded as the new name became visible.

PrevPreviousMuleriders seen around the world: Faculty and students making a difference across the globe in 2017
NextDr. Robin Sronce finds important connections in Rankin CollegeNext