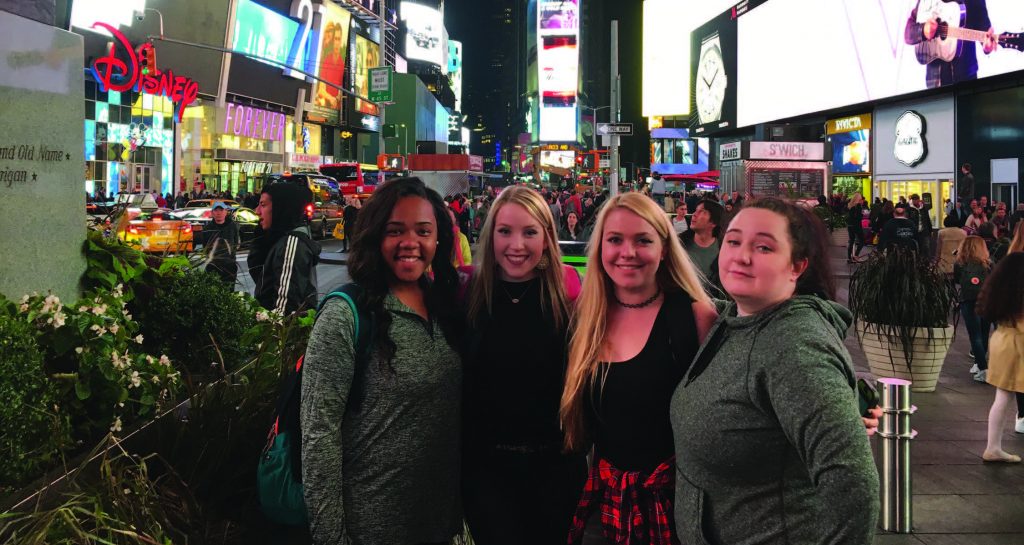 Richard Vollmer, instructor and production manager for the Department of Theatre and Mass Communication, said four SAU students had a great time touring New York City and “shadowing” stage managers on Broadway during a recent trip to the Big Apple sponsored by the University.
He said he “can’t think of many other universities” that provide similar opportunities to theatre students.

Darby Taylor, Alycya Thomas, Mikayla McCoy and Shelby Arnette were selected to represent SAU on the theatre department’s annual trip. “I’m so grateful to have been chosen for this trip,” Taylor said. “It has truly changed my life.”

Students had to apply for the trip, and the four were chosen based on specific criteria, including interest and academics. Vollmer and the students were in New York from Oct. 11-16 and stayed in Long Island City, just outside New York. They rode the subway into the city each morning and had a well-rounded experience fueled on “coffee and street-vendor food. We ate a lot of dollar pizza,” Vollmer said.

The trip is intended to expose students to the “real world” of working theatre and start them thinking about career choices in the field. This year’s group was allowed to shadow stage managers on The Lion King, The Phantom of the Opera, Wicked and School of Rock, all Broadway smashes.

“It’s wonderful for kids from a small town to see that they can work in theatre, that these things are out there and they can do it,” Vollmer said. All four students have experience in SAU theatre and want to work in theatre in some form or fashion.

“They represented SAU very well,” Vollmer said. “Each night, they would go backstage and shadow on actual productions, as they were being performed in front of tens of thousands of people. Afterward, they’d run up to me and tell me about everything they got to do. It was very exciting.”

Vollmer praised SAU for sponsoring the trip. In addition to seeing and shadowing Broadway plays, the students took educational tours of the Statue of Liberty, Times Square, the Freedom Memorial (site of the former World Trade Center) and Radio City Music Hall (where they spoke with an actual Rockette). Cab rides through New York also proved an exciting experience. “They kept asking me how those taxi drivers learned to drive,” he said with a laugh.

The most important lesson they learned was that “they can do anything. Living and working on Broadway is not an impossible dream,” Vollmer said.
Taylor agreed, adding that New York City “isn’t some unreachable place. People are living the lives and doing the jobs that my fellow performers and I would like to have. Seeing it as an attainable place to live and work is a perspective I would never have had before this trip.”