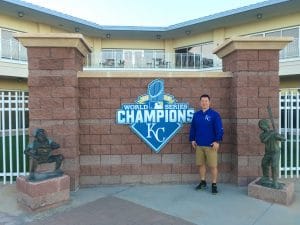 Yuichi Takizawa, a May 2017 graduate of Southern Arkansas University, has accepted a full-time position as an athletic trainer with the Texas Rangers organization.

While an athletic training student at SAU, Takizawa participated in internships with the Kansas City Royals as well as the Rangers. “Yuichi was one of our many outstanding students who have gone on to be successful in our profession,” said Ken Cole, SAU’s head athletic trainer. 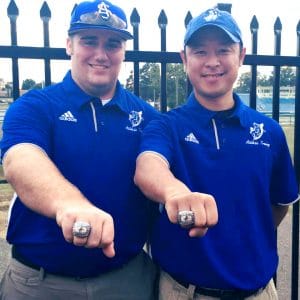 very excited to announce that I’ve accepted this position,” Takizawa said. “I’ll start working the beginning of January 2018. I appreciate the support of SAU. Though I did an internship with the K.C. Royals and the Texas Rangers, my roots in athletic training are with SAU.”

Born in Hokkaido, Japan, Takizawa grew up in Tokyo. “I graduated a four-year university with a degree in sociology, and then went to technical school to learn the basic knowledge of a sports trainer,” he said. “In 2011, I went to a language school in Los Angeles to pass TOEFL, which is necessary to enter a four-year university in the United States. I attended a community college in Kansas. Before I decided to come to SAU, I sent queries to all colleges with athletic programs in the state. Ken Cole was the quickest to reply to me and he was very kind to talk to me about the program. Thus, in 2013, I chose SAU.”

“At that time, there was only other Japanese student on the campus,” Takizawa said. “I strongly felt that my English would improve quickly and that I could achieve a lot of things. My favorite thing about SAU was that it felt like home and family.”

“Athletic training is a three-year program at SAU. Students are assigned to a team each semester,” Takizawa said. “Each assignment is guided by a preceptor in order to gain hands-on experience. In my interviews with the preceptor, I was able to talk about my skills and how I could improve. That was very precious time. All preceptors are very professional and they guided me to take a position in the professional baseball setting.”

“I was involved in the Athletic Training Student Club while at SAU,” Takizawa said. “This organization raises funds to go to the NATA Convention. This club helped me achieve some big tasks.”

“During my last semester at SAU in 2017, I did an internship with a Major League Baseball team, the K.C. Royals, in spring training in Surprise, Arizona. Then I had another internship with the Royals’ affiliate team, the NWA Naturals, by the end of the season,” he said.

His internship was possible through an exchange program between the Professional Baseball Athletic Trainers Society (PBATS) and the Japanese Baseball Athletic Trainers Society. “It was very cool because I could have hands-on experience with players I saw on TV,” he said. “I experienced how MLB athletic trainers work every day. I learned that whatever, whenever, wherever, I need to be a professional.”

“As mentioned, I had a season internship with the NWA Naturals. At every game, I would talk to other teams about a position. In August, we played away games in Frisco, Texas. I spoke with the Rough Riders’ athletic trainers and learned there was a rookie-level position available with the Texas Rangers minor league system. I sent my resume and cover letter to the medical coordinator of the Rangers. After a couple of weeks, I had two phone interviews with the medical coordinator and assistant medical coordinator. After that, they were interested in me, and they invited me to the Rangers’ complex in Arizona for another interview. Then I was invited to the Dominican Texas Rangers Academy in the Dominican Republic to interview. At the end of the process, I was officially offered a position for the 2018 season.”

He expressed thanks for the support he received from SAU. “Ken Cole, Hannah Sutton, Mike Skare, Stephen Baldwin and Jan Killsgaard helped me very much. When I came to SAU, I couldn’t speak English well. However, they supported me every day.”

He recalled his fondest memories at SAU. “I got two champion rings. The first was my second semester with the baseball team, the second was my fourth semester with the softball team. I was very lucky to work with wonderful teams, athletes, and preceptors. SAU has very high standards. I learned how I should work as a professional at SAU. I strongly want to tell students that if you want to work as an athletic trainer, SAU is the place.”