SAU Band grows along with University 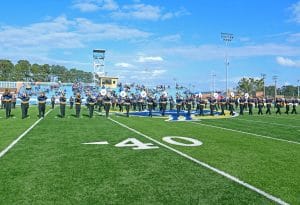 The SAU Band has grown by such leaps and bounds in the past 10 years that it has necessitated the physical growth of the Band Hall, said J.P. Wilson, director of bands and assistant professor of music.

Wilson said plans call for Magale Rehearsal Room to be increased from 3,264 square feet to 6,632 square feet, with the addition of 52 feet that will include new practice rooms. The room is located in the Richard O. Oliver Band Hall, which opened in 2008.

The extension will free up sufficient space in the existing hall for music lessons, teaching, practice and storage. It reflects the surge in enrollment that has had a positive impact on both the University and the Mulerider Band.

“SAU’s skyrocketing growth has locked in with growth in the band,” Wilson said. “You couldn’t have scripted it any better. “

The primary rehearsal hall was built to hold a 150-piece marching band – larger than the space the band once occupied in Brinson Hall – but is no longer adequate since this year the band started with 153 members. “We’re literally shoulder to shoulder in here,” Wilson said.

The expansion will grow the west side of the building out toward Dolph Camp and will provide enough room for decades to come, Wilson said. “It’s a fantastic problem,” he said of the need for more space. “What we are going to have here will just be staggering.” 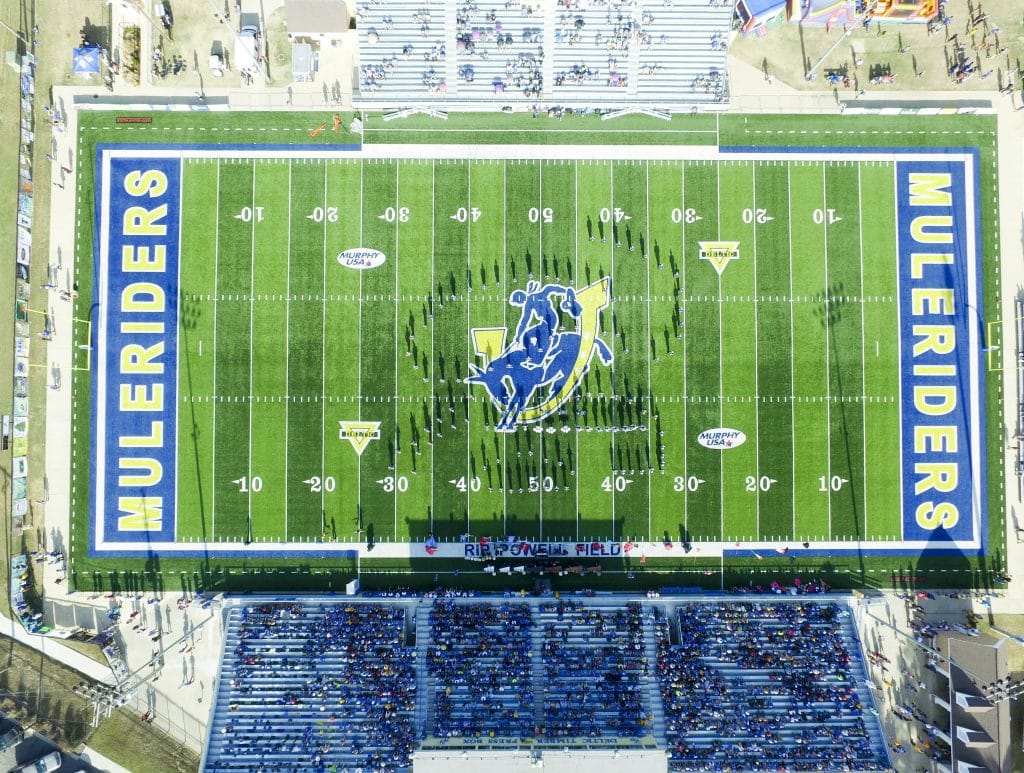 A greatly enhanced reputation and marketing directly to students and their parents have led the Mulerider Band to new heights.

“When I started here in 2000, we were a small program,” Wilson said. “We built our product, focusing on our marching band and recruiting some dynamite kids. Talent breeds talent, and success breeds success.” 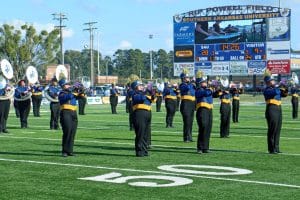 “What helped push us where we are is that we play harder music and march more difficult routines than other college bands around us,” Wilson said. “There’s not a band we face that does anything like what we do. They don’t do the same number of sets or play the same level of music. We had to set ourselves apart. When I started, we had 72 kids. What we ask our kids to do is phenomenal. The music we pick is super-hard to play in air conditioning, but we ask our kids to go out onto a 115-degree field and march, maintain their posture, and hit a specific mark. Physically, it’s similar to what a world-class athlete would do in a marathon.”

Wilson now relies on social media to recruit students and spread word about the program. “I realized a long time ago that kids will respond to a text message a lot quicker than they will a phone call,” he laughed. “I used to mail letters to band directors asking for lists of their kids. Now I use Facebook and SnapChat. Today when we have a student accept, I will take that student’s picture and immediately post it on Facebook – to my page and the band’s page – and tag as many people as possible. My feed will just blow up! We’ll get thousands of likes and comments, and it’s all good for SAU and our program.” 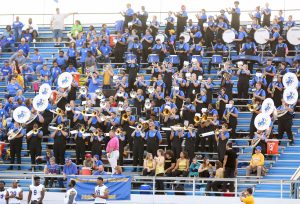 He is able to recruit heavily from East Texas as well as from Central Arkansas, including nine players from Cabot this year. On a recent morning, he walked into his office to find six letters of intent from students who had decided to sign with the Mulerider Band. “I was not expecting all these today,” he said with a smile.

“I’ll go and talk to a student and their parents and tell them everything they need to know about our program,” he said. “Two or three days later, I’ll get a message from the parents saying they cannot wait for their child to be a member of our program. You just never know what’s going to happen on your visits. I try to tell them, look, it’s important to me that you come to SAU and get a good education and be a part of something special. No other band program takes care of each individual player as a person like we do. I care and I want them all to succeed.”

“We’ve got great kids. Without a doubt, this is the deepest talent in our top ensemble that I’ve seen in 18 years,” Wilson said. “There is not one section that is not super this year. I’ve got the best flute section I’ve ever had, and I’ve had some monster flute players here. It’s unbelievable.”

“You don’t know what kind of opportunities will come your way in the blink of an eye that can benefit us, and I embrace all of them,” Wilson said.