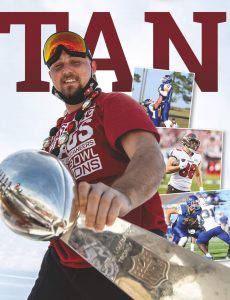 In the moments following Super Bowl LV, the game clocks in both the north and south end zones of Raymond James Stadium read 0:00, the digital LED ribbons flashed “CHAMPIONS” accompanied with the colors of red, pewter and orange and the finality of the 101st season of the National Football League nestled slowly like a light fog over a lake. Multiple, smaller celebrations began to take place succeeding the night’s pinnacle moment: the presentation of professional football’s most coveted hardware, the Vince Lombardi Trophy.

Among those sharing in more intimate revelries, and there were plenty of them as the Tampa Bay Buccaneers became the first NFL franchise to win the world championship in their home stadium, was third-year Tampa Bay tight end and newly-crowned Super Bowl Champion Tanner Hudson. The Camden, Tennessee, native
could be found around the 35-yard line on the south end of the stadium, amidst the fallen confetti on the grass playing surface, taking in the nearly unbelievably surreal moment in time.

“It was honestly unbelievable to think that I was on a Super Bowl-winning team,” remarked Hudson. “It was amazing to have my fiance and mom lying on that field with me and knowing that my dad was looking down from above.” Ninety-one players played at least a single snap on that cool, Sunday night in central Florida, including Hudson whose white jersey front was plastered with a yellowish end zone paint from a late third quarter target from legendary teammate quarterback Tom Brady.

Hudson added that playing in the Super Bowl is “an incredible feeling” with the week leading up to the game and the pregame certainly standing out. “Once you get rolling in the game it definitely calms down a little bit but it is still the Super Bowl.”

A former two-time All-American, recipient of multiple all-region and All-GAC plaudits and a member of the Great American Conference’s All-Decade Team, Hudson’s eight snaps played in Super Bowl LV pushed him into the elite company of former Muleriders that have competed on professional football’s biggest stage.

Signed by Tampa Bay as an undrafted free agent in 2018, Hudson was activated for the team’s final two games that season, before erupting the following preseason which propelled him onto the team’s initial 53-man roster in 2019. During the Super Bowl-winning campaign, Hudson played in 11 games, including all four of the Buccaneer’s
playoff games.

Hudson’s playing career as a Mulerider served as the final stepping stone in his journey to the NFL. During his time in Magnolia, the playmaking pass catcher hauled in 143 passes for 2,152 yards and 25 touchdowns, and in each of his final three seasons he recorded at least 40 receptions for over 600 yards with at least six touchdown grabs.

Hudson and the Buccaneers officially begin their title defense on September 9 in a Thursday night primetime matchup at home against the Dallas Cowboys. Mulerider fans can get their first glimpse of the former Mulerider in his fourth year as Tampa Bay’s two-game preseason slate begins on August 14 against the Cincinnati Bengals inside Raymond James Stadium.

When asked about his role for the ’21 season, Hudson feels that it will be very similar to the title-winning season of 2020. “I feel that it will be a lot like last season. We still have Gronk [Rob Gronkowski], Cam [Cameron Brate], and OJ [Howard], so I just plan to do my job and whenever I get my chance to go in the game [I’ll] make the best of
it. We all still have to grind through camp and prove that we are worth putting on this team.” He added, “I look forward to the competition.