It was a beautiful morning prior to the kickoff of Mulerider Football’s Great American Conference matchup with Oklahoma Baptist on October 30, and Southern Arkansas University and Mulerider Athletics took the opportunity to officially dedicate the campus’ newest athletic facility: the Dawson Athletic Complex.

The crowd was filled with university and athletic department administrators, faculty, staff, student-athletes, coaches, fans, and donors to the project which included the Dawson Family, who has played an essential role in the construction of multiple athletic facilities at SAU. 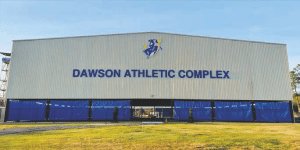 ed those in attendance with a history lesson as he spoke of surplus steel from the WWII effort that was obtained by Colonel Charles S. Wilkins, the president of Magnolia A&M from 1945 to 1950. That steel would become the home grandstands of Mulerider Stadium which opened in 1950 on the northeast edge of campus. The new facility had a capacity of 4,000. It would be named Wilkins Stadium decades later, honoring President Wilkins.

“Today, fast forward 75 years and we are standing under steel that is again going to transform SAU Athletics,” remarked the University’s president. “This is going to be a place that will impact every sport on this campus and every athlete on this campus. Dawson Family, I think you know that this is more than just a building. This is a place where life is going to happen. Life is going to happen each and every day. A place where dreams are going to come true, where young men and women from large towns, small towns….will come and fulfill their dreams to play collegiate athletics.”

Berry added, “Long after all of us are gone, this facility will still continue to change lives.”

Located just south of the Mulerider Track and Field Complex and directly to the east of Wilkins Stadium at Rip Powell Field, SAU visitors are now greeted by the prevalent structure when entering campus from US Highway 82. The 175’ wide by 190’ foot long by 50’ foot tall facility features a 60- yard turf field from GeoSurfaces with field markings for multiple sports and state-of-the-art LED lighting from GeoSport Lighting Systems.

“I don’t know if we could have done this in today’s market with the supply chain issues and inflation,” noted SAU Director of Athletics Steve Browning. “But we had forward-thinking people. Once the initial donation was made and the Dawson Family jumped on board, we had others that joined and those in leadership positions that said “let’s get it done now,” and now we stand here under a facility that is going to benefit every one of our athletes, every one of our coaches, and help us for years to come.” 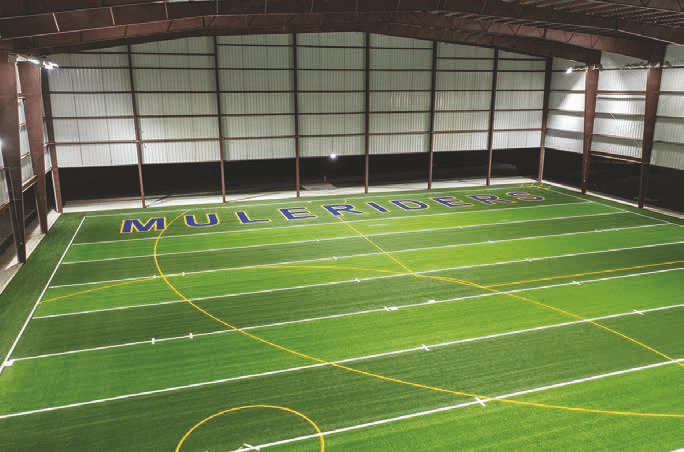 Browning also talked about how the facility will not only be used for in-season workouts and practices, but also in the summer for athletic camps and clinics to help keep campers safe from the blistering summer sun of south Arkansas.

Head Coach Justin Pettigrew, whose Mulerider Baseball program will certainly benefit from the new facility, was very appreciative of those that played a part in making the facility a reality and addressed those in attendance on how a structure like the Dawson Athletic Complex will help his program become more efficient.

“Not only is it [Dawson Athletic Complex] going to be beneficial as far as how much work we are going to be able to get done, but we are also going to be able to crunch that time down and that is something that is important,” noted Pettigrew. “It will be huge for us to get valuable reps, but also a lot more reps in a facility this size and be able to condense our time where our student-athletes will be able to go back and study and do the things that they need to do to be successful off of the field.”

The facility was funded entirely through private support from alumni and friends, and its completion now provides an immediate impact to over 450 student-athletes, coaches, and administrators that make up the 14 athletic programs at SAU.

One of those student-athletes, Mulerider Softball’s Sarah Evans, who is also a student athletic trainer at SAU, has witnessed firsthand the transformative facilities that have been constructed since her arrival on campus in the fall of 2018. Evans spoke about how the facility will reshape the athletic training department’s approach to rehab.

“We now have the ability to do our strength and conditioning programs inside the facility, just like the athletes do, but from the rehab side of things to help them improve and get them back onto the field,” stated Evans. “I am just so happy that I have been able to be here throughout my whole college experience, and I am blessed that everyone else can experience it, too.”