Four-time Super Bowl quarterback, Terry Bradshaw, enthusiastically and humorously urged a sold-out audience at Southern Arkansas University to live joyfully, embrace opportunities, and find reasons every day to be thankful. Bradshaw delivered his remarks as the 2021 Farmers Bank & Trust Distinguished Speaker in the W.T. Watson Gymnasium, an event that raised over $51,000 to benefit SAU scholarships.

Dr. Trey Berry, president of SAU, welcomed friends and alumni. “Tonight is all about our students,” he said, stressing the importance of SAU’s history with Farmers Bank & Trust. “You can drive around this campus, in any direction, and see the influence of Farmers Bank. It was here from the very beginning.” Berry announced Kimber Birdsong of Prescott, Arkansas, and Seth Horn of Farmington, Arkansas, as the recipients of the Farmers Bank & Trust Scholarship. “Thanks to Farmers Bank for its indelible impact on generations of students,” Berry said. 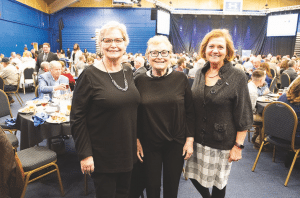 Bradshaw used his signature humor to regale the audience with stories of inspiration and encouragement. “I knew from the age of seven that I wanted to play for the National Football League,” Bradshaw said. “When I put my hand on the football, something magic happened. Find the one thing in life that you want to do, and don’t let anybody talk you out of it.”

The 73-year-old Shreveport native played high school football at Woodlawn High. He was the No. 1 overall draft pick in 1970 from Louisiana Tech. Bradshaw became one of the most prolific quarterbacks in history, leading the Pittsburgh Steelers to four Super Bowl championships, six AFC championship games and eight straight playoff appearances (1972-79). 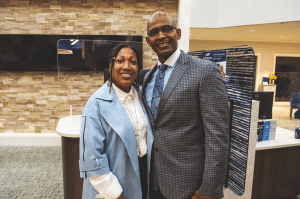 Bradshaw stressed the importance of good leadership, shaking hands, and offering a friendly smile. “Everybody follows somebody.” He also emphasized the need to express gratitude. “I love saying ‘thank you,’” he said. “The most important thing in life is how you approach people. You cannot be successful in life until you learn how to love everyone.”

With his warm, folksy humor, Bradshaw shared that living joyfully is more important than temporary happiness. “If your favorite team wins, you’re happy,” he said. “Joy sustains us. It’s rock solid. There should be something that triggers joy in your life, that says to you, ‘let’s go, let’s accept the challenge.’”

He said that throughout his career, he never lost faith in his abilities or in the knowledge that “God’s greatest gifts are compensation for trials and tribulations.” “I never was any good,” he said of his early football years. “I didn’t know how to snap, I couldn’t run out of my own way. Not one time did I ever question, ‘I’m going to the NFL.’ Pursue, pursue, pursue.”

He recalled his experiences in the huddle for the Pittsburgh Steelers as an example of leading people to victory. “I never yelled at anybody on the football field,” Bradshaw said. “I led them with love.” 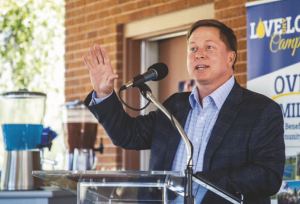 Through the most ambitious comprehensive fundraising initiative in its 112-year history, Southern Arkansas University has far surpassed its goal of raising $22.275 million thanks to the generosity of Mulerider alumni