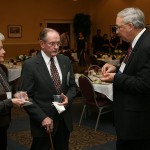 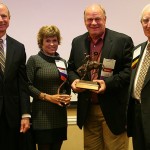 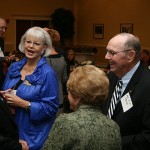 For the second consecutive year, the Southern Arkansas University Foundation has inducted new members into the Mulerider Society, the highest recognition given to the University’s benefactors. The honor is reserved for those who make lifetime contributions of more than $500,000.

During the SAU Foundation Honor Societies dinner on Nov. 9, 2010, Mr. and Mrs. Therral Story ’85 of Magnolia received the Mulerider Society honor for their contribution of $2 million towards the construction of a covered rodeo arena on the SAU campus. As Mulerider Society members, the Storys were presented a hand-sculpted bronze Mulerider.

Also during the dinner, donors to the University were thanked by Tommy Clark, a junior finance and management major from Hot Springs. He expressed appreciation on behalf of students for the generosity of the honorees.

SAU students Tyler Orsak and Sara Caller hosted an informal art exhibit by students of Dan May, chair of the Department of Art and Design.