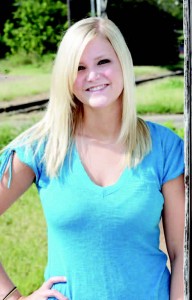 “It was so exciting,” said Milam. “It took my worries about paying for college away.” Milam, 21, was the first El Dorado Promise recipient to  graduate with a bachelor’s degree and she did so from Southern Arkansas University.

Majoring in business management from SAU’s College of Business (which was named best in the state that same year), Milam hit the ground running and accomplished her goal to graduate from college within three years.

“My dad was my inspiration. He graduated from college in three years with his accounting degree,” said Milam. “I knew I wanted to do it just like he did, but I didn’t know how. Once I established my major, the advisors helped me plot my course and keep me on course.”

Though Milam started her college education at another Arkansas university, she transferred to SAU with 29 course hours under her belt and 124 more to go.

“I started dating my husband (Joseph Milam, a business marketing major) and we tried the long-distance relationship for about six months. I wanted to be closer to him and to home,” she said. “He kept telling me that SAU had the best [business] program in the state.”

Joseph Milam was convinced his future bride would love it at SAU.

Milam said she never lost sight of her goal.

“I always knew how many hours I completed each semester and would double check at least once a month making sure I was staying on course,” she said.

The surprise announcement by Murphy Oil on that cold January day at EHS changed Milam’s life and the lives of generations of El Dorado students.

Sylvia Thompson, El Dorado Promise Coordinator, was an EHS teacher at the time the Promise was unveiled.

“Oh my! What a fabulous time that was!,” she said.

Before the Promise, approximately 60 percent of EHS graduates enrolled in college. That number jumped to 76 percent immediately after the announcement. In 2008, 82 percent of the students enrolled and that number reached over 90 percent by 2010. Over 800 students have enrolled in 85 different colleges and universities around the United States.

“I think the Promise is creating an I-am-going-to-college mentality at EHS,” Thompson said.

More than $3.8 million have been awarded to El Dorado Promise scholarship recipients. At least 47 Promise students were enrolled at SAU during fall 2010.

According to Thompson, the school district’s enrollment has increased by 4 percent after years of declining enrollment.

Milam plans to open up a dress shop with her mother, Susan Baldwin.

“SAU gave me the skills, now, I just have to put them to use,” she said.