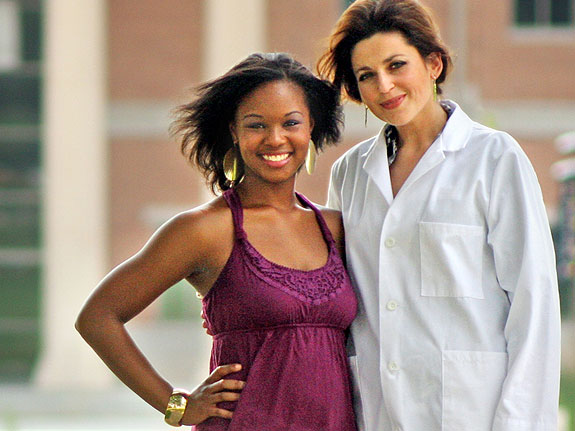 Valerie with Dr. Black in front of the Science Center

Valerie Brown always knew that she wanted to go to college. Growing up in Crossett, a town in southeast Arkansas’s delta, she was interested in everything from choreography to architecture and medicine, but she could never decide on a particular career path. That changed when she came to Southern Arkansas University in the fall of 2006.

Inspired by Dr. Viktoriya Black, a professor she describes as “amazing,” Brown discovered a tremendous desire to pursue a future as a doctor of optometry.

“I’ve always had problems with my vision, so I want to help others improve theirs,” said Brown. “In my second year here, I knew I wanted to major in biology/pre-optometry. Ever since my first class with Dr. Black, I realized that she was an amazing teacher who is willing to help. She really makes sure you  understand the material.”

Brown said that her initial concerns about being bored in college were swept away as she got involved in the many campus activities and organizations.

She is a member of the SAU Heritage Singers, Chamber Singers, president of the Lambda Mu Chapter of Delta Sigma Theta sorority and was the 2010 Miss Southern Arkansas University.

“My favorite thing about SAU is that there are so many different
organizations for people to be involved in,” she said. “I considered other universities in Arkansas and Louisiana, but SAU feels like home.”

Once she graduates in December 2011, Brown will attend the
University of Houston Optometry School. “I am going to miss the feeling of being in a place where everyone knows you,” she said. “But, I know SAU has provided me with so many opportunities and great experiences that I might not have otherwise had.”

According to Brown, her greatest honor of the year was being crowned Miss Southern Arkansas University and representing SAU in the Miss Arkansas Pageant.

Brown received two scholarships – the Alumni Academic Scholarship and a choir scholarship, in addition to the additional scholarships she received as Miss SAU, Miss Magnolia and Miss Black Student Association.

A tight-knit group of alumni has shown their enduring care and affection for a true icon of Southern Arkansas University — Dr. Margaret Downing, a

Why I Give – Linda Barnes

For Linda Harris Barnes, giving back to Southern Arkansas University is not only the right thing to do, but a way to help future students

SAU Volleyball gives the game back to the Magnolia community

With its intercollegiate fall season postponed and shifted into a shortened slate to be played out in the spring of 2021, the Southern Arkansas Women’s