Doing what they can for the community 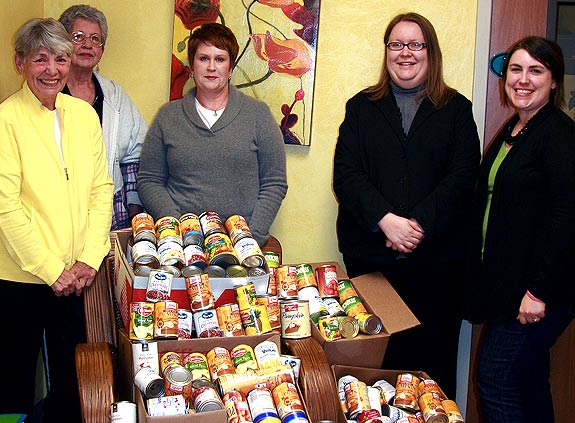 Merilyn Jones and Dot Pennington accept a donation of canned food from Dr. Chrisanne Christensen, Jennifer Rowsam, and Dr. Brittney Schrick. The food was collected for the Body and Soul Cupboard.

For the past two years, Dr. Chrisanne Christensen, associate professor of psychology at Southern Arkansas University, and other faculty in the department have put community service into action as an optional part of the curriculum.

Though the faculty of the department are involved in many community-related projects, one that is close to their hearts is the monthly food drive to benefit Asbury Methodist Church’s food pantry, Body and Soul Cupboard. Though it continues year round, the food drive falls into the limelight particularly during the holiday season, when the need for food increases.

In 2008, nearly 450,000 Arkansans struggled to put food on the table, according to the most recently available facts from Arkansas Hunger Relief Alliance.

Asbury’s Body and Soul Cupboard has been in action providing food to those in need in the community since 2002.

“Thanksgiving hits us really hard,” said Merilyn Jones, who along with Dot Pennington, oversees the Asbury food pantry. “November and December are our heaviest months. We normally give out food to 200-250 families.”

According to Christensen, the church provides a list of needs each month.

“This month (October) they asked for canned fruit and pumpkin,” said Christensen, pointing to a board in the hallway across from her Peace Hall office where the needs are posted. “Other months, it’s vegetables, or whatever they need. We try to collect whatever we can.”

Some instructors, like Jennifer Rowsam, adjunct professor and director of advising, give participating students bonus points.

“I do it – not because I don’t think they would still bring food – but, the small bonus gives them a little incentive to remember it,” she said.

It’s not just enrolled students that are involved, Christensen said.

“I have a lot of students who haven’t been students for years, who still come by and see what they can bring,” she said. “Another group finds out what we need, then pools their money and provides us with cases of whatever it is. It’s wonderful.”

According to Jones and Pennington, the Asbury pantry distributes food twice a month on the second and fourth Thursday.

Christensen estimated this month’s drive brought in 525 cans of food, which were handed over to the pantry on Nov. 3.

On average, the department collects 150 to 250 cans of food, but according to Jones, there has been a slight increase that she believes is tied to a higher enrollment at SAU.