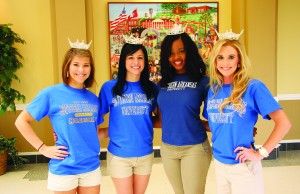 Southern Arkansas University is home to four reigning queens, who are headed to Hot Springs July 13 to participate in the Miss Arkansas Pageant.

No stranger to pageants, former Miss SAU Valerie Brown, 22, a senior biology major, will compete wearing the Miss Texarkana crown and banner. This will be her third time to compete at Miss Arkansas.

“This is my last year to compete, so I’m excited,” she said. “I hope to place, but I’ve learned you have to keep trying when you want something. It doesn’t matter how long it takes you to get there.”

Brown is active in Delta Sigma Theta sorority, the SAU Heritage Singers and Chamber Singers. She is also a senator and is involved in the Student Government Association.

Current Miss SAU Rianne Herron, 22, a recent pre-dental graduate from Omaha, Texas, will represent SAU. This will be her first time to compete on the state level.

“I’m nervous, but it definitely makes this a lot easier knowing I have three friends who will be there with me,” she said. “I’m happy I did it my senior year. I’ve enjoyed this experience so much, but it’s a bitter-sweet thing to know it’s coming to an end.”

Herron was involved in Sigma Sigma Sigma sorority, Tri-Beta Honor Society and the Residential Hall Association. She served as a Housing Ambassador and was on the Student Activities Board.

Elizabeth Liberty, 18, a sophomore from Magnolia, will represent her hometown as Miss Magnolia. Liberty has a love of singing and has been competing in pageants since early childhood. Having competed in the teen system of the Miss Arkansas pageant, she knows a little of what to expect.

“I’ve been singing on stage since I was 13. I’ve always done pageants because it was a good way to get to sing, but this is my first time in the Miss Arkansas Pageant,” she said. “I’m excited to get to represent my hometown and to be a part of the SAU team.”

Miss Lights of the Delta Ashley Walthall, a 20-year-old business major from Magnolia, will be making her second appearance in the Miss Arkansas Pageant.

“The first time was stressful really. I was younger and I was so caught up in learning that I didn’t have time to focus on the friendships,” she said. “This time, I am and I’m hoping to have more fun. It feels better knowing that we will be together and have friends come together to support more than just me.”