1950-1959
Jo Anne (McAdams) Powell ’51 was honored as one of this year’s Women of Distinction by the Girl Scouts. The award is given by the Girl Scouts each year to a group of women and a business to honor them for their commitment to community service. Powell is the San Angelo Regional Director for U.S. Congressman Mike Conaway of Texas. In December, she and her husband Charles will celebrate 57 years of marriage.

1960-1969
Donny Woods ’68 was included in Accounting Today’s Top Influential Individuals for the class of 2010.
Accounting Today is a leading publication in the accounting profession.

Harry Thomason’s ’62 “The Last Ride” opened the Little Rock Film Festival in June 2011. Thomason’s film was shot in Arkansas and employed numerous Arkansas residents on both sides of the camera.

Dan Veach ’69 was inducted into the Arkansas Track and Field Hall of Fame. Veach served 20 years (1988-2008) as both the men’s and women’s head cross country and track and field coach at SAU before retiring in 2008 and was an All-America performer for the Muleriders, competing from 1965-69. During his tenure at SAU, Veach coached 84 All-AIC picks and 28 track and field All-Americans. Five women’s teams won AIC championships and the men’s program finished runner-up four times. In 1992, his Mulerider 400-meter relay team won the NAIA national championship held in Abbotslord, Canada. Veach was named the AIC Coach of the Year five times.

1970-1979
Johnny White ’74 has decided to retire as Cabot School District athletic director after a long career as a teacher, coach, and administrator. White has worked for the Cabot school district for 35 years as a teacher and coach. He served as athletic director for 23 years. He is being replaced by former Arkansas State University and Southern Arkansas University football coach Steve Roberts ’89.

1980-1989
Russ Sherrill ’86 began serving as principal of Springhill Elementary School in July. He holds a bachelor of arts from Southern Arkansas University and a master’s degree in school counseling from the University of Central Arkansas. Sherrill has served as chair of the Saline County Crisis Response Team and as middle school/junior high vice president and co-chair of the Critical Incident/Crisis Response Committee of the Arkansas School Counselor Association.

Allard Baird ’86 was promoted to vice president for player personnel and professional scouting with the Boston Red Sox.

Kristi (Heaton) Barger ’89 was promoted to senior vice president at Hot Springs Bank and Trust Company in Hot Springs where she is also manager of the trust department. She also recently graduated from the Jeff Farris Leadership Academy for Rotary International District 6170. She and her husband Gary live in Hot Springs and have one daughter.

Shea (Hutchins) Wilson ’90 was named public information officer for the Arkansas Department of Corrections. She had been managing editor at the El Dorado News-Times since 1998. Wilson previously served on the SAU Alumni Board of Directors.

Ahmedul Hoq ’93 is a CAD Designer for AECOM, a civil engineering company.

Dennis Joseph ’03 is employed by Cardinal Health as a senior product/market manager and is responsible for a state-of-the-art inventory technology for pharmacies that helps manage their prescription drug inventory.

Chance Hugh ’08, a math instructor at the University of Arkansas Community College at Batesville since last August, recently returned from Mexico City, where he played on the All-South Rugby Select Team.

Gitanjali Shrestha ’08 recently received an annual graduate student award from the WSU Association for Faculty Women. Her transitional research at WSU focuses on substance abuse prevention, specifically on the real-world dissemination of the “Strengthening Families Program” for parents and youth. She plans to pursue a Ph.D. in developmental science and prevention. 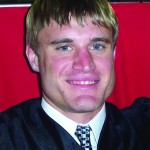 Ryan Lee Bell ’08 graduated in May 2011 from Louisiana Tech University with a bachelors of science in electrical engineering technology. He has accepted a position with Halliburton Energy Services as an associate field professional cased hole in wireline and perforating services line. He will be based out of the Kilgore, Texas, area.

Clayton McWilliams ’10 recently completed training with the Arkansas State Police to be a state trooper and will be assigned to Highway Patrol Division, Troop E, in Desha County.

Canon Lester ’11, a true rookie from Southern Arkansas University, has been added to the Southern Illinois Miners baseball team roster as an infielder.