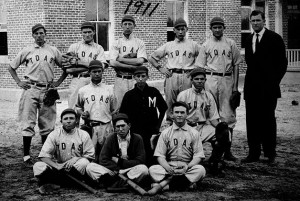 Baseball fans first heard the crack of a Mulerider ballplayer’s bat 100 years ago. On March 3, 1911, the Third District Agricultural School’s Board of Trustees authorized $70 for uniforms bearing the school’s initials. That spring the team played ball for the first time.

Hainan Holtzclaw, an agriculture instructor, coached the team in the early games. A baseball diamond in a cleared field at J. W. Witt’s cotton farm (west of the present day Peace Shopping Center on Jackson Street) was marked off for these contests, all between TDAS and Magnolia High School.

Even after TDAS became a junior college, Magnolia A&M College, in 1925, the Mulerider baseballers continued to meet only local clubs rather than college teams. College President Charles A. Overstreet, a frugal administrator, would authorize travel expenses to other colleges for football and basketball games but would not permit the baseball team to venture far from Columbia County.

As a result, Sage McLean, who coached baseball from 1923 to 1940, did not treat that sport with the serious focus he brought to Mulerider football, which he led to several state championships in the 1920s.

In a 1951 interview with The Bray student newspaper, McLean, who had become dean of men, recalled that with baseball there was an “attitude of playfulness on the part of the players and spectators.” McLean substituted freely so that often everyone got to play. An indication of baseball’s low priority at Magnolia A&M is that the sport did not have its own ballpark.

A major turning point in Mulerider baseball history occurred in the 1950 spring semester under President Charles S. Wilkins. He wanted full participation in the state’s athletic conference in accord with the Board of Trustees’ vote to transform the junior college into a four-year institution, Southern State College.

For the first time, in 1950, the Mulerider baseball team completed a full schedule against other Arkansas colleges. This was made possible by the hiring of an additional coach/trainer, Ralph Ross. During most of that season, the Muleriders had to stage home games five miles from campus in Waldo at Travis Jackson field, named to honor a hometown hero inducted into the Baseball Hall of Fame.

On days between games, Coach Ross, his players, and physical plant personnel worked so that finally Mulerider baseball would have its own field on campus. They leveled and rolled the grounds next to the new football stadium, built in 1949, and took other steps to ready the baseball diamond for an inaugural game on April 28, 1950, with Henderson State College. Spectators, however, had to sit on the ground until wooden bleachers were erected in 1952. Other improvements at the field would not take place for decades.