From Parkdale to the Pentagon

From simple beginnings to one of the highest-ranking officials in the Central Intelligence Agency, Southern Arkansas University alumni Rickey Jasper has never found himself lacking in ability against high-caliber competition.

“In the CIA, I have been in programs competing with the caliber of candidates like Harvard graduates. I’ve gone from here to all over the world, and I have never found myself in a position where I wasn’t competitive,” Jasper said. “I was always in the top 10 percent, and I was from SAU. This is just the beginning point for some great people who have come from here. We do well –graduates from this school.” 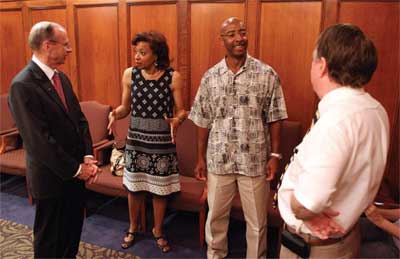 A last-minute decision to nix the military to attend SAU with his twin brother, Mickey, set his course. He immersed himself in his studies. SAU would do more than provide the political science major an extraordinary educational foundation; it would also provide a way for him to meet Sheila Thomas, a business major from Emerson.

“She walked into the cafeteria glowing,” he said, looking at his wife of 26 years. “I have always needed glasses, but I saw her.”

Sheila noticed right off that Rickey was different from other guys.

“He only had one pair of shoes, a pair of red Converse tennis shoes,” she said fondly. “But, he was determined. Rickey was a bookworm and didn’t do parties. He was on a mission even then.”

The two would marry after graduation and have two sons, R.J. and Tyler.

From Dallas to D.C., Jasper worked his way up the ranks, accepting his first assignment in Berlin at a time when the wall between East and West Germany had just come down. From there to Belize to Singapore and places in between, the family learned to love each place and its people.

The Jaspers had a long list of teachers who made a difference, but Rickey particularly credits Dr. James Willis for encouraging success.

The Jaspers have remained impressed with SAU’s College of Business and the wonderful professors who helped them forge their paths.

“I’ve been to a lot of schools, including Harvard, this stands heads and shoulders above many of those. I’m impressed,” said Rickey Jasper.

“Success in life stems from a solid foundation,” he said. “In retrospect, I couldn’t have scripted it any better.”