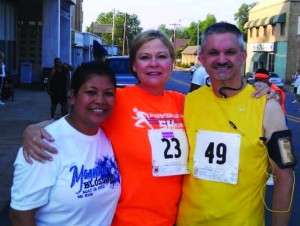 “I probably would have been a runner instead of a walker, if I had started sooner,” she said. “But, I’m just glad I discovered it at all.”

Bloss, who is dean of the School of Graduate Studies at Southern Arkansas University, always admired her father, who stayed active until he died at the age of 84.
“I want to be like him – active for as long as I can,” she said.

That desire to live a healthier life motivated Bloss to seek opportunities to stay active and involved. Her first 5K was the Honors Haul at Southern Arkansas University.

The event was part of a year-long fundraising effort to serve the Arkansas School for the Blind and Visually Impaired. Combined with other efforts, the “Fincher Hall Project” raised nearly $38,000 toward renovation, new equipment and materials for the Little Rock school. The results of SAU student-powered fundraising, combined with the hard work of Instruction Librarian Del Duke and Peggy Walters’ graduate studies class for Library Media and Information Specialist (LMIS), set a precedent at SAU.

In May 2012, the Association for the Education and Rehabilitation of the Blind and Visually Impaired bestowed upon Walter’s LMIS class and Fincher Hall the “Arkansas Distinguished Advocate Award” for outstanding contribution to the visually impaired. Bloss, Duke and Michael Woods were among people accepting the award on behalf of SAU entities at the banquet. The acknowledgment is a reminder to Bloss of the event that started her love affair with 5Ks.

“The Honors Haul was my very first 5K,” said Bloss. “And I was hooked! I compete with myself, always trying to get a faster time than the previous 5K. I always like it when the money [from the event] goes toward an important cause, but I think I would do it anyway.”

In November 2011, Bloss started training for the Little Rock half-marathon – a distance of 13.1 miles. Encouraged by Bloss, graduate students began to join with her. Greg Taylor, Zachary Seaton, Brad Stout, Shree Malakar and others decided to run in the Little Rock event.

So many SAU graduate students were joining the fray that Bloss decided to have custom T-shirts made for the group to wear at the event. April 2012 brought a chance to participate in the “Get Up and Glow 5K”, the Greene Hall and University Housing sponsored, night-time fundraising event, which came with glow-in-the-dark T-shirt and accessories.

Kathy Cole, director of online learning for graduate studies, and graduate studies secretary Gaye Calhoun started joining Bloss as she checked events off her list when they rolled around on the calendar – the Blossom Festival 5K in May, Malvern’s Brickfest 5K in June, The Camden Barn Sale 5K in September, and, of course, Race for the Cure in Little Rock.

“As Dr. Denise Moseley says, ‘it’s all about the shirt.’ It is true,” Bloss said, when asked about the spoils that represent her personal competition – T-shirts that are provided to participants in 5K events. By now, she has quite the collection of them and the collection will continue to grow, if she has anything to say about it.

She is also proud of her medals for placing in the top three of her age category and trophies in the walking category of the Magnolia Blossom Festival 5K in 2011 and in 2012.
She is truly addicted to the competition against herself. The constant striving for improvement mirrors her mission, as well as that of SAU. The same value to always progress and the desire to help those in her charge to live happier, healthier lives fuels her love of her job.

It shows in all that she does. It’s also the same values she admires about SAU. The university represents to her a special spirit that makes the experience of growth memorable for those who pursue improvement through its programs. To Bloss, it’s all about the people.

“I love the people, the feeling of community and family at SAU. It impresses me – the quantity of talented, gifted people all in one place,” she said. “I am constantly in awe of the people that work here – not just in academics, but the work ethic so many people demonstrate everywhere on campus.”