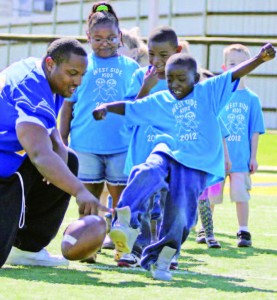 The kindergarteners rotate to different stations. Here they line up to hone their kicking skills with a mighty Mulerider mentor

It’s not just competition that fuels Southern Arkansas University’s Mulerider football team. Muleriders are motivated to give back to the community they call home. Since fall 2010, members of the team have joined with Talbot Hall residents to dedicate two hours of their time to participate in the physical education lesson with Magnolia’s Westside Elementary’s kindergarteners. The goal is to promote physical activity as part of a healthy lifestyle, but according to Westside Principal Jill Rader (an SAU alum) it does so much more for the children who look up – in more ways than one – to the towering athletes.

“For one, these students get to see past high school to college. Each week they come and bring them positive male role models – and they need those anytime. This gives them that and something to aspire to,” Rader said.

“Muleriders for Movement is all about giving back to the community,” said Gary Herron, assistant director of housing, who oversaw the April 17 field day event on Mulerider turf – literally – SAU’s football field in Wilkins Stadium.

Football stars worked with the kids at different stations, running them through some of the drills that players perform each practice session to keep them in shape.

Smiles and excitement were evident in the little faces as they tried their best to impress their mentors. “This program is all about giving back. It allows our SAU students a chance to be role models to the youth of today. I don’t know who gets more out of it – the kids or the players. There are smiles on every face,” said Herron. “These are positive role models who are tangible, accessible. They aren’t just someone you see on TV. They are real and within reach. It’s a beautiful thing.”

Quarterback Tyler Sykora visits Westside every week. For him, the visits are a way to give back and to show that football players are more than competitive athletes.

“I think it shows that we care. Life is more than football,” he said. “It’s about making relationships and giving back some of what God has given me. I hope the message it shares is that if you work hard and give it your best, you can accomplish whatever you want.”

It’s hard to imagine that anything can sap the endless energy of a five-year-old, but following in the footsteps of their hero football players did the trick. The children saw just how strenuous the life of an athlete is. By the end of the field day, the kindergarten-aged kinetic mass of energy – that only minutes earlier had mimicked that of Mexican jumping beans – was tamed, tired and ready for lunch and a nap.

It’s tough, yet rewarding, being a Mulerider.

The program was awarded the RHA or Residence Hall Association Educational Program of the year and Herron was recognized as faculty/staff of the year at the Greek Life Awards Banquet Sunday night. The award was given in recognition of his work with the Muleriders for Movement program and his work with Greek life and students across campus.