Dr. Claude Baker: A scientist with a passion for history, heart of service 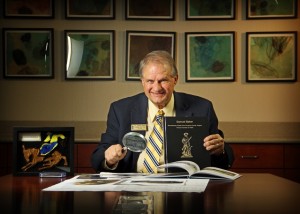 It’s rare to find someone with the ability to seamlessly blend a career and personal passions with service, but Chair of Biology Dr. Claude Baker does it beautifully.

Everything he does is with a heart of service beating behind it, even using class time to teach while offering volunteer service, such as his summer 2012 project that led his class through Magnolia Cemetery documenting headstones. As part of the classwork, students were able to chart the data to determine survivorship curves and other chartable trends. After they used the data for their research, the students uploaded the photos to the FindAGrave.com website, which is a national effort to provide a virtual record of every cemetery in the United States.

His excitement in teaching and his heart of service is contagious. Students respond and learn and that is why he was recognized by students as Advisor of the Year in 2012. Baker learned by the example of his parents, who devoted their lives in volunteer service to their south Arkansas community. For him, giving back comes as naturally as breathing.

“Their example of service influences my teaching,” he said. “I want to encourage students to want a life of service. Financial gain is great, but it would be nice if it were used to push their fellowman forward to make a better place.”

In the 1980s, his passion for history and genealogy prompted him to join his uncles in tracking the Baker family history. They began early in the process believing the family tree had roots in Missouri, but glitches in the information led the scientist on a search for facts. What he uncovered was a Baker family hoax that dated back into the 1890s.

In his search, Dr. Baker discovered that unscrupulous men had developed a scheme related to a Jacob Baker’s land in Philadelphia, Penn. where one of the U.S. Mints was built. They led people to believe that the estate was searching for heirs, who would inherit millions if they could prove their connection to the landowner.

“They would make up these charts which automatically connected them to the Jacob Baker name – no matter who you were. People scraped together $100 to prove their lineage in the hopes of inheriting a fortune. These were times when people didn’t have a lot of money.” According to Baker, about 20 men were prosecuted in relation to the scam in the 1930s, but the story was forgotten as generations passed. With the Baker name being a common one, there are still people out there who believe the information in falsified family history records is accurate.

“Any Baker needs to know that the hoax exists,” he said.

Baker spent hours to studying his own research with a magnifying glass trying to separate the phony records from the real ones. After more than 35 years of work, his book “Samuel Baker: Revolutionary soldier from Fauquier Co. Va. Pension Number S 10354” was finally published in 2012.

During his personal research, Baker learned about genome projects that use DNA to track genetics to the region of origin. The test uses the Y chromosome in men and mitochondrial testing in women to link genes and markers to known Haplogroups.

Baker’s DNA falls into the R1b1a2 Haplogroup, which links his lineage to Western Europe.

“When they use DNA in forensics, they say DNA doesn’t lie. It gives my search validity and that is important,” said Baker. “DNA testing is becoming more affordable as more people are doing it. My next project that I hope to do is DNA testing of the Bakers in Columbia County (Ark.).

Baker said that the SAU College of Science and Technology is developing a new program for bioinformatics, which he said is a “way of looking at things cybernetically.”

“You use DNA to look at the gene pool and information,” he said. “Bioinformatics is the study of retrieving, storing and analyzing biological data, like DNA. Dr. Shawn Krosnick is already using it with plants. If we succeed, we will be the only school to offer the course in Arkansas.”

Baker also said hopes are high that a marine biology program will also be offered by fall 2013. That, too, would be the only such program in the state.

Before coming to SAU, Dr. Baker was a professor at Indiana University where he was awarded both the distinguished teaching and distinguished research awards. He also received the all-university teaching award over all professors on the eight Indiana University campuses. In 2006, Baker received the Presidents Volunteer Service lifetime award for his over 5,000 hours of volunteer service.