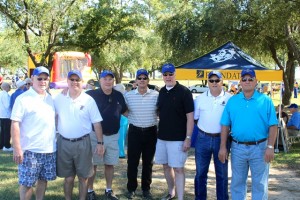 The championship Mulerider football team of 1972 learned a lifetime of lessons from Coach James “Sonny” Whittington – lessons that made a difference on the gridiron and in life.

His enduring influence in their lives sparked a group of alumni teammates to start an endowment in Whittington’s honor.

“As a defensive coordinator, Coach Whittington was ahead of his time,” said Terry “Bo” Ray.

Whittington would spend hours after each game scrutinizing the films of other teams and provide each of his players with a detailed game plan for each game, complete with statistics, strategies, and tendencies of Mulerider opposition.

“He broke it all down for us,” said Boyd Rosser, a middle linebacker from Dekalb, Texas. “We knew their every move, every play down to the hash line.”

Whittington brought drills to what was then the Southern State College Mulerider football program – one of which the team detested – the stick drill.

The dreaded drill involved a baton and two players. All four hands grasped the baton.

“You had to take the stick away from the other person,” said Ray, with Rosser and Phil Brooks reacting to the memory sparked by his mention of the drill.

The only rule of the drill was no hitting below the waist or kicking. Its purpose was to show who wouldn’t give up… who would persevere with dogged determination in the fight to hold on to the baton.

Not only did the stick drill instill crucial characteristics to make the Mulerider football team a nationally-ranked force, it was a lesson in life that the men never forgot.

“It wasn’t until later in life that I realized that the principle of the stick drill was meant to also be applied in life,” Ray said. “It was about determination to a single purpose and putting forth the best effort in all that we did.”

For Rosser, the drill took on a more intense meaning later in his life when he found himself sick in the hospital with a life-threatening illness that defied diagnosis. Doctors were stumped and his family braced for the worst.

“Three things kept me from letting go – My faith in God, my wife and kids and that stick drill,” Rosser said.

“A lot of things he taught us can be applied to life situations,” said Phil Brooks, who started the team as quarterback. “He taught us in everything he did. We played as a unit – a team. There was no super star, no favorites with him. When he yelled, he yelled at everyone.”

Ray reminisced about points in his post-college career.

“When things would get tough, I always compared that ‘tough’ thing with my experience with [the Muleriders],” he said. “Because of what I learned on that field, I knew I could make it through anything.” The 1972 team was ranked in the top five in the NAIA (which is now the NCAA Division II).

“There were records broken under his tenure that still stand,” said Brooks. “Coach Whittington set the bar high.”

To participate in building the Sonny Whittington Athletic Endowment and ensure its completion, visit the SAU Foundation website  or call SAU Foundation at (870) 235-4078.

Beginning in 1957, Sonny Whittington played under a half-scholarship for Southern Arkansas as a freshman from Rison under Coach Auburn Smith. Before the year was out, he had worked hard enough to earn a full scholarship and he finished out his Mulerider career as an All-Arkansas Intercollegiate Conference (AIC) cornerback in 1960.

After a high school coaching career, he returned to Magnolia in 1968 to work with Head Coach Raymond “Rip” Powell as assistant coach of the Muleriders. This period from 1969 to 1978 of working with Powell, Calvin Neal, Bobby “Cotton” Staten, Jim Canter and Eldon Hawley would prove to be one of the University’s greatest eras of football with a compiled record of 62-38-2 for a .618 winning percentage over 10 seasons.

Even with his success in coaching, his impact was more widely felt by more students beyond the gridiron when he took over the office of admissions for SAU in 1979 – increasing enrollment by an average of 60 students per year. Under his leadership and marketing strategies, the student body at SAU grew from 1,739 to 3,127 by the time he retired in 2001.

He attributed his success in his 23 years of recruiting to lessons learned from Powell. Treating each student as unique and meriting the personal touch became his hallmark.

Sonny and his wife, Sherry, have a son, Mike, and daughter, Whitney. Mike played tennis for SAU in the 80s.