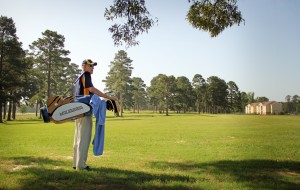 People ask SAU Golf Coach James Robertson all of the time, “Why Southern Arkansas University?” Robertson, who has built a reputation of success as a PGA tour instructor, former director of The St. Andrews Golf Academy and staff writer for The World Golf Teachers Federation, simply responds, “I’m here because I want to be here.”

“This is a phenomenal place and we can do phenomenal things. We can make a difference in kids’ lives. I’m excited about where we’re going,” he said. “Dr. (David) Rankin is excited to be here. He is excited for the vision he has for SAU. The question should be, how do we get that same excitement in everyone?”

Known for his blunt honesty and candor, Robertson says you should not ask him a question for which you do not want an honest answer. He has strong principles that shape his every action and he attributes his success in life to lessons learned from other successful people, like best-selling book author and life coach Stephen Covey. Not only did Robertson learn from reading Covey’s “Seven Habits of Highly Effective People,” he learned from the man himself.

A certified Covey instructor, Robertson believes in Covey’s seven habits principles. He has learned by watching the successful people who have impacted his life.

“I learned to surround myself with smart people and learn from them,” said Robertson. “We create our own opportunities, create choices and make decisions. If your life is a mess in one area, you aren’t going to be successful in others. Meaning, you can’t live life one way and play golf another. Both have to be in harmony and support each other,” said Robertson. “That is what it takes to succeed.”

His professional golfers call him “Doc” but he is more widely known as just “Coach.” Even his two daughters refer to him as Coach. He jokingly adds that only bill collectors call him by his given name.

When speaking with Coach, mind your vocabulary.

“You can tell a lot about somebody by the words they choose,” he said. “If you spend time listening to people’s vocabulary, it will tell you who is in control and who is not. If 90 percent of what comes out of their mouth is negative, that tells you a lot.”

Lost in college, Robertson said he had no direction from family, professors or counselors.

“I was really lost,” he said. It was the introduction to and opportunity to work for Auguste Busche, Jr. (owner of Anheiser Busche). That connection introduced Robertson to sports marketing and he loved it. Other connections would follow.

“Through that relationship, I met Mark with IMG and started working with professional golfers and I have never looked back,” he said. “Thirty eight years. My path found me. I didn’t find it.”

Incorporating the seven habits, Robertson has sculpted a mission statement for his life that puts the success of his family first and foremost. Golf is his second family and he places his priorities in that order. His first wife, Judy, passed away when their daughters Sarah and Amanda were in high school and sixth grade grade (respectively). At the peak of his career, he found himself with a decision to make. He chose to give up traveling to be a stay-at-home-dad and put his heart into raising his daughters. Now that both are in college, he accepted an offer to take on SAU’s golf team. The widower met his second wife, Lesley, on campus at SAU and the two married in 2012. At this stage in his life, his focus is on creating success in the relationships of his life.

“My proudest accomplishment is my relationship with my daughters. They are such great human beings,” he said.

His mission statement continues to include: never compromising integrity, remembering to seek first to understand before seeking to be understood and defending the one that is absent.