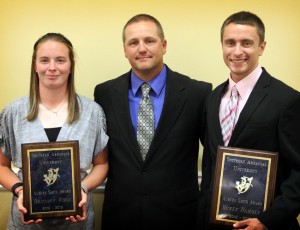 The 2013 recipients of the Auburn Smith Award were Brittany Wood, left, and Mickey Hammer, right. They are pictured with SAU Athletic Director Steve Browning.

Seniors Mickey Hammer (men’s cross country) and Brittany Wood (softball) received the highest distinction a student-athlete at SAU can garner as they were chosen as the 2012-13 recipients of the Auburn Smith Award. The two were presented with the award at the annual SAU All-Sports Banquet on Monday, April 22, 2013.

The Auburn Smith Award, given annually to both a women’s and men’s student-athlete, is named in memory of Auburn Smith, who served as athletics director, administrator, coach and instructor at the University. Athletic ability, performance, character and scholastic achievement are all considerations by which head coaches and athletic administrators at the University selected the honorees.

Hammer, who was the individual champion and runner of the year in the Great American Conference this past fall, has also received numerous regional and state recognitions in his time at SAU. Of those, Hammer was a 2012 Arkansas Star of Tomorrow Award Finalist, a three-time All-Region Runner, a two-time All-GAC First-Team Runner, an All-GSC Second-Team Runner, and was named as the GAC Runner of the Week five times.

Academically, Wood, a Physical Education, Wellness and Leisure major, has made the President’s List at SAU four times and made the Dean’s List three times. She has also been named to the 2011-12 GAC All-Academic Team and the 2011 GSC Academic Honor Roll.

In addition to the Auburn Smith award, the SAU athletics department awarded a male and female student athlete of the year and honored an outstanding athlete from each sponsored sport at SAU.

Receiving the Scholar Athlete of the Year Awards for the 2012-13 athletic year were Tyler Sykora (football) and Auburn Smith Award winner, Brittany Wood.