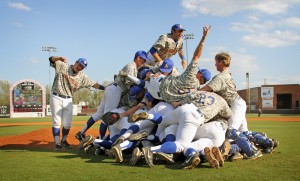 The dramatic walk-off home run that won the inaugural 2012 Great American Conference Baseball Tournament a year ago was not needed this year for the top-seeded Southern Arkansas baseball team, but the result was much of the same as the Muleriders cruised to an 11-2 win over Arkansas-Monticello to capture their second straight GAC Tournament Championship.

The tournament crown is the Muleriders’ (40-15) fourth in the last five years as they won the Gulf South Conference Tournament title in 2009 and 2011. The win also gives the Muleriders their 40th win this season, making it their eighth 40-win season in the last 15 years, and their first since 2010 when they ended the year 47-10.

With the repeat of their postseason conference championship, the Muleriders are the fourth team in the league to accomplish the feat.

All the Muleriders’ runs over the first six innings were in support of starter James Baune. Baune, who was later named the Tournament MVP, threw 6.0 innings of scoreless baseball to earn his second victory of the tournament.

In the aftermath of the repeat GAC Championship, SAU earned an at-large bid into the 2013 NCAA Division II Central Region Tournament. The at-large bid earned the Muleriders their sixth consecutive regional tournament appearance.

Individually, James Baune, Jason Dahl, and David Harris took home the most accolades as each was selected to multiple All-Central Region teams. Baune would also go on to earn All-America honors from two baseball media outlets while Harris was named as the Natural State Baseball Player of the Year in addition to being named as semi-finalist for the Tino Martinez Award (DII Player of the Year) and a finalist for the inaugural Josh Willingham Award (DII Most Valuable Player). The trio was also among 10 total Muleriders to garner All-Great American Conference honors as each were First-Team selections.

A few weeks after the Muleriders’ season came to a heart-breaking end three standouts from this year’s team caught the attention of professional scouts and were snatched up on June 8 at the MLB First-Year Player Draft. With this year’s three draft selections, the Muleriders have now had an impressive 11 players get drafted since 2009 and 28 since 1976.

Baune was the first Mulerider to be drafted this year as the Los Angeles Dodgers took the Rockwall, Texas, native with their 21st-round selection (pick #634). Mere minutes following Baune getting drafted, SAU’s all-time leader in saves, Justin Thomas, joined Baune as a draft selection when the Washington Nationals took the White Oak, Texas, native with their 21st-round pick (pick #646). Harris rounded out the draft class for the Muleriders as he was taken by the Toronto Blue Jays in the 36th round (pick #1,075).

Most recently, right-hander Jon Mark Abbey signed with the Southern Illinois Miners of the independent Frontier League. Abbey’s signing with the Miners gives the Muleriders a solid pipe-line as former standouts Cannon Lester and Hayden Simpson along with Brad Hall are all on the Miners’ current roster.

You can be a part of this 2013 Great American Conference Championship. Make your contribution to help purchase a championship ring for a deserving student athlete today by clicking the “Make a Gift” button on the SAU Foundation website or by calling 870-235-4078. Donations may also be mailed to the SAU Foundation: P.O. Box 9174, Magnolia, AR 71754-9174.