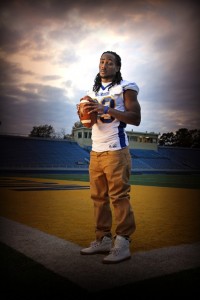 Growing up in the Dallas-Ft. Worth area of Texas, Don Unamba had a single focus.

“I grew up thinking football. I have never wanted to do anything else,” he said.

Growing up in a state known for its love of football, Unamba watched his brother, Trumaine Johnson, on the gridiron and was a loyal fan of the Dallas Cowboys. If he was breathing, football was his oxygen.

Once he graduated from L.D. Bell High School, his abilities on the field had long caught the eye of one of Southern Arkansas University’s football coaches, who eagerly recruited the tall cornerback. It was that persistence and friendship that turned Unamba’s attention to SAU.

“He kept up with me and invited me for a visit. It was definitely smaller than what a big-city boy is used to, but it felt down-to-earth, calm and easy-going,” he said. “We all connected, became a part of the team, and got close.”

Starting out as a business major, Unamba devoted a couple years to that focus, until he figured out that he had an affinity for the sciences. With so much time already devoted to business, he shifted his emphasis to social sciences and kept business as his minor.

“I looked for something different. I found that social sciences kind of encompassed everything,” he said. “Somewhere along the way I learned that I have a thing for science, especially biology – learning about cells and the way things work.

“Mr. Makia stayed on me. He taught me to take care of business. Playing football, it’s hard to get it all done while trying to get to the next level, but he wouldn’t give me any breaks. He made me work,” said Unamba. “It taught me a few things about myself, but mostly, when I put my mind to something, I can do it.”

“Don currently leads the Great American Conference in passes defended,” said Coach Bill Keopple. “Don made first team all-conference and also tied for third in the GAC with three interceptions; one for a touchdown. He’s had 16 broken-up pass receptions, which leads the GAC. Numerous professional scouts have been on campus this fall evaluating Don. They all tell us that he will get an opportunity to play in the NFL.”

Unamba will head to NFL training camps in Florida when he graduates in May. According to Unamba, SAU Coach James Colzie, who played for the Tampa Bay Buccaneers after his college years at Florida State has been a tremendous help.

“Don brings a lot to the table as a player and person,” Keopple said. “He’s a great young man – which is very important in being a good football player. He has a great work ethic, he understands the game, he has great instincts, he’s coachable (meaning he will listen, take the knowledge in, and apply it) and loves to play the game. His teammates trust him to do his job on and off the field. He’s the best corner in the Great American Conference in my opinion.”

As his dream of playing professional football moves in the direction of reality, Unamba is grateful.

“It’s a good feeling. We’ve been through so much. All the time and effort we put into practice. No one really knows how much we put into each game,” he said. “This year, it finally took a turn and we had a chance to show what we’re made of. That’s a good feeling, but a little bittersweet too. It was a good way to spend my senior season.”

The most memorable moment for the cornerback was his first touchdown in the last game of his SAU career – an interception return from 66 yards against Ouachita Baptist University.

Unamba is eager to do his part to show the world what a Mulerider is capable of.

“It doesn’t matter what NFL team. As long as I make it,” he said. “I have never wanted anything else, so to be so close to this, it gives me chills,” he said. “I’m staying humble and thanking God for this chance. I’m lucky to have a great family and a good support system of friends and teammates. It’s time to put another Mulerider in the NFL.”

“I spent the rest of the day thinking about those kids and how their faces lit up. When I make it to the professional league, that is something I hope to continue to do. It is great to have a chance to make a positive impact on those who look up to you.”

The SAU cornerback was honored in December as one of the top defensive backs in the country in being named to the 2012 AFCA (American Football Coaches Association) Division II Coaches’ All-America Team.