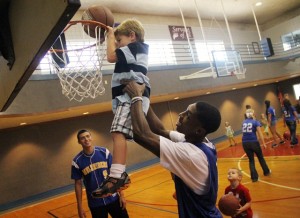 The Southern Arkansas University athletic department has been awarded the 2013 NCAA Division II Award of Excellence for Community Engagement. The award was presented Friday, April 12, 2013, during the Division II Identity Workshop at the NCAA national headquarters.

The Award of Excellence serves as the Division II National Championship for community engagement. The Muleriders were chosen for the national recognition as a result of the “Muleriders in Magnolia” campaign.

“It is a great honor for the work of our student-athletes to be recognized on a national level,” said SAU Director of Athletics Steve Browning. “We want our athletes to perform at the highest levels on the playing field and in the classroom, but through this focus on community engagement, they are learning to be difference makers in the community now and in the future. They have worked hard over the last year, and this award is a direct reflection of the quality of their work.”

“At any given athletic event on our campus, it is safe to say that a majority of the fans in the stands are members of the community of Magnolia,” notes Browning. “That is why it is so important for us to get out and give back to the community to show our appreciation for their support of Mulerider athletics. We also realize how significant of an impact our athletes, as role models, can make on the community.”

For the calendar year of 2012, “Muleriders in Magnolia” saw a total of 132 student-athletes participate in community service activities on nine separate occasions. Organizations that student-athletes went to in the Magnolia community included: Central Elementary, Eastside Elementary, Magnolia Health and Rehab, McNeil Head Start, South Arkansas Youth Services, and Wee Care. During their time at these local organizations, student-athletes spent time decorating Magnolia Health and Rehab with Christmas decorations and they also interacted with youth by engaging in recreational activities.

In the brief time that this community engagement project has been underway, the impact on the community, the Southern Arkansas campus, and the student-athletes of SAU has been overwhelmingly positive.