Steve Keith appointed to SAU’s Board of Trustees 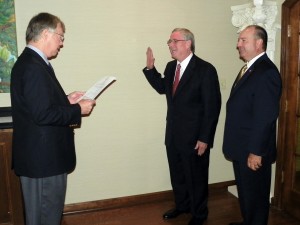 William “Steve” Keith, center, gets sworn in to his position on the SAU Board of Trustees by Columbia County District Court Judge Mike Epley as Ark. Sen. Bruce Maloch looks on.

William “Steve” Keith has been appointed to the Southern Arkansas University Board of Trustees. Keith is an SAU alum and President of Farmers Bank & Trust.

The appointment was announced by Gov. Mike Beebe on Monday, June 10, 2013. Keith will replace Ronnie Ribble of Hot Springs. The appointment expires January 14, 2018. Keith took his position on the board at the June 20 board meeting.

“It is a great pleasure to have Steve Keith join our Board of Trustees,” said Dr. David Rankin, president of SAU. “As an SAU graduate with a strong background in business and education, he will bring a wealth of experience, knowledge, and dedication to the University.”

Keith said that SAU holds a special place in his heart. Not only did he earn two degrees from SAU, a BSE in 1974 and a MSE in 1977, but several members of his family are also proud alumni from SAU. They include his mother, the late Dorothy Keith; his sister, Nelda Keith Peace; his brothers, Mark and Phil Keith; his son, Kyle; and his wife, Kerry Cloud Keith.

Keith is a graduate of the Arkansas Bankers Association Lending School, the National Commercial Lending School in Norman, Okla., and the Southwestern Graduate School of Banking at Southern Methodist University.

He joined Farmers Bank & Trust in 1983. Before becoming president of the bank, he served as the bank’s Senior Vice President of Lending, Executive Vice President of Commercial and Retail Lending, and Chief Lending Officer. Keith is also currently a member of FB&T’s Board of Directors.

Keith and his wife, Kerry, are lifelong residents of Columbia County and attend Jackson Street Church of Christ in Magnolia. They have two sons – Korey and his wife, Kim, and grandchildren, Kamdyn and Kollier; and Kyle and his wife, Mandi – all of Texarkana.

“I am very honored to serve on the Board of Trustees,” said Keith. “Dr. Rankin and the Board have done an excellent job establishing Southern Arkansas University as a prominent institution of education.”