Whitley Up: SAU student’s dream cut short by cancer, but her positive spirit lives on 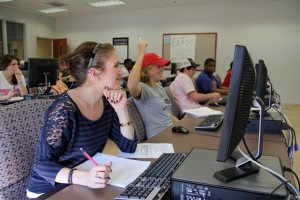 Whitley Reeves Barnard was at SAU to learn how to run her own business someday. Cancer changed her path, but the courage and faith she represented against all odds taught all who came to know her story how to “Whitley Up.”

Whitley, 22, of Magnolia, passed away on May 2, just one day before she was slated to graduate with honors with a business degree from SAU, and less than a year after she was diagnosed with stage-four lung cancer.

“From day one, they told her that this cancer cannot be gotten rid of,” said Whitley’s mother, Nanette Hoyle. “When the doctor gave us that diagnosis, Whitley looked at me and said, ‘no crying, Mama.’ She didn’t ever want me to cry, and that’s been hard. I tried not to, but I have cried, I promise you.”

Nanette said that she can count on five fingers how many times Whitley cried as she continued to go to class and work part time while fighting the spreading cancer with chemo, and later radiation, at M.D. Anderson.

“As instructors, we would all want her to be the tired, exhausted, worn out and worn down person that she should have been because of the cancer. But she would not give us that person,” said Sheryl Edwards, instructor of economics and finance at SAU. “She was going to work till the end. She taught us how to keep our eyes on the prize while facing extreme obstacles.”

Nanette said that Whitley was able to maintain her positive spirit because of the enormous faith her daughter had. Nanette also credited the work of the “Prayer Warriors” she enlisted and updated through Facebook.

Mallory, Whitley’s little sister, recalled that the slogan “Whitley up” came from a “warrior’s” post on Team Whitley’s Facebook page. According to Mallory, a cousin of Whitley was in a waiting room and dreading her imminent dentist appointment when she thought about Whitley’s courage. “I can handle a dentist appointment. I just need to Whitley Up and do this,” the post read.

The slogan grew from there, as did the army on Team Whitley’s Facebook page, which is now more than 2,000 strong.

And Mallory anticipates that number to continue to grow as Whitley’s family is launching a corporation to raise money in Whitley’s name, with all proceeds benefiting M.D. Anderson’s Moon Shots Program. This program is projected “to make a giant leap for [cancer] patients – to rapidly and dramatically reduce mortality and suffering in several major cancers,” according to www.mdanderson.org.

The family is currently working on trademarking the Whitley Up logo for bracelets, hats, t-shirts, and other merchandise. Nanette and Whitley’s father, Cris Reeves, also established the Whitley Reeves Barnard Finish Strong Scholarship through the SAU Foundation. The scholarship endowment has already received donations, as the family requested them in lieu of flowers in Whitley’s obituary, but more money is needed to fund this venture that will benefit future students in the College of Business.

“I can think of no better way to honor Whitley than to give other students an opportunity to finish the education they started,” said Dr. Lisa Toms, dean of the College of Business. “Whitley was so dedicated to her education and so determined to finish it. It is wonderful that her family chose to give others that opportunity in her name.”

Whitley had a dream of one day running her own salon. Nanette said that Whitley had a gift of style, and was going to use that to help people look and feel beautiful. She was particularly interested in helping cancer patients like herself. She was going to enroll in cosmetology school after graduating from SAU.

As the commencement ceremony approached, Toms phoned Whitley’s hospital room. Toms told Nanette that SAU wanted Whitley to walk with her friends, even though she had to take a medical withdrawal earlier in the spring semester.

“I wish they could have seen the smile on Whitley’s face when they said that. She was so happy she was going to get to walk with them,” said Nanette. “Of course, it didn’t work out.”

SAU extended an invitation for the family to attend the graduation and for a family representative to accept Whitley’s honorary diploma. Mallory fought through her emotions and stood strong as the crowd filling the gymnasium at SAU stood to their feet to honor the family and Whitley’s memory. A photograph of Mallory getting her sister’s diploma was posted on SAU’s Facebook page, and the photo has garnered more than 2,200 likes, almost 300 shares, and around 70 comments.

“I asked her one day, I said, ‘Whitley, I know people want to know how you keep that smile and your positive attitude.’ She said, ‘I just know I am going to be ok.’ And she did,” Nanette said. “And we did too, and that’s what gives us the calmness and the peace.”

In the final days of Whitley’s time on Earth, when a whisper was all she had strength for, she pulled her family close so she could say a prayer for them. It was instances like this and so many others that exemplified Whitley’s sincere soul. Nanette continues to receive testimonials about how Whitley’s shining example has inspired others in their respective walks of faith.

A card mailed to Nanette told of a lady who was moved to take the next step in her path because of Whitley. As such, she chose to be baptized on the same day of Whitley’s funeral.

Nanette said it was a blessing that Whitley wedded Matt Barnard on December 1, 2012. She explained that it was a beautiful dream come true for Whitley, and that Matt was there with Whitley through everything.

Nanette was also recently blessed with matrimony, as she married Bruce Hoyle on June 12, 2013.

Mallory is planning on starting the nursing program at SAU in the fall. She was a finance student at the University of Central Arkansas, but withdrew in the spring of 2012 to be with Whitley, and through their journey together was inspired to join the medical field. 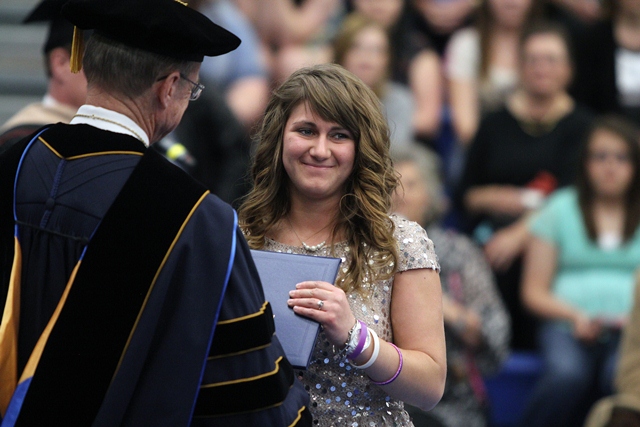