Dr. David Rankin has announced that the 2014-15 academic year will be his final year as President of Southern Arkansas University. 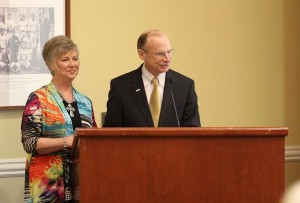 Dr. David Rankin is joined by his wife, Toni, as he announces his upcoming retirement on May 1.

Rankin was appointed President in 2002, and quickly set forth with his ambitious “Blue and Gold Vision,” SAU’s first-ever capital campaign. In his 13 years, he has almost completed that vision with numerous campus capital projects completed, totaling more than $100 million. The most recent project, the $4.4 million SAU Story Arena and Farmers Bank Reception Center, opened this spring. In addition, a $7.2 million Student Center at SAU Tech is nearing completion.

Rankin’s first challenge was securing funds for and completing the $15.5 million Donald W. Reynolds Campus and Community Center in 2004. The Reynolds Center was the largest construction project SAU’s campus had ever seen, but following it is a list of impressive projects that include the $17.5 million Science Center, a 30,557 square-foot Agriculture Center, $2 million Natural Resource Research Center, a new $2.3 million band hall, a $2.3 million addition to the Wharton Nursing Building, a multipurpose student activity facility, University Village Apartments, three new residence halls, as well as improvements to all athletic facilities. 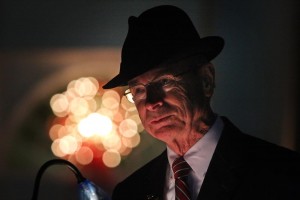 Dr. Rankin is active in campus events all year. Above, he is pictured speaking during the annual Celebration of Lights.

With each completed construction project, Rankin facilitated growth for SAU’s quality academic programs. Many cutting-edge programs have been added to SAU’s comprehensive list of degrees, including the recent engineering program, the computer game and animation design program, wildlife and marine biology, and digital cinema production.

Rankin has also paid tribute to SAU’s strong heritage by maintaining the campus’ Georgian architecture with each new additional construction project. He also built upon the tradition of the Mulerider, not only telling the history of SAU’s unique athletic mascot at his speaking engagements, but using the Mulerider as a way to brand the University nationally.

Resulting have been years of steady enrollment growth. Despite difficult times in higher education, the fall of 2013 witnessed a record system-wide enrollment of 5,451 students (including SAU 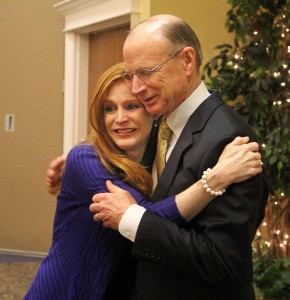 Dr. Rankin is embraced by his daughter, Beth Anne, following his retirement announcement.

Fellow faculty colleagues selected Rankin as the University Honor Professor in 1986. In addition, the Americanism Educational League Award for excellence in teaching Free Enterprise Economics was awarded to Rankin multiple times. He was also a George Washington Honor Medal recipient from the Freedoms Foundation for Excellence in Economic Education. Subsequent to Rankin being chosen the Outstanding Phi Beta Lambda Advisor from Arkansas in 1989, he served on the FBLA-PBL, Inc. National Board of Directors. 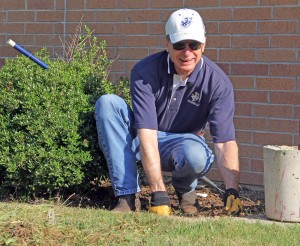 Leading by example, Dr. Rankin took part in a campus clean-up day in 2013.

Rankin has been actively involved in the Boy Scouts of America as a troop leader for many years and is the proud father of two Eagle Scout sons. He has received the District Award of Merit and the Silver Beaver Award. He is a member of Central Baptist Church serving as a Sunday school teacher in the Men’s Department, where he enjoys song leading with his guitar.

Rankin and his wife, the former Toni Cameron, reside on their farm in Magnolia and have two sons, Curtice and John, and a daughter Beth Anne.