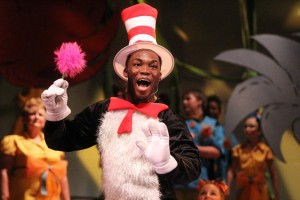 Christian Williams lights up the stage of Seussical the Musical as the character Cat in the Hat. Williams is a junior theatre major from Hope, Ark.

The 2014-15 year for SAU Theatre promises to be an exciting sequel for both students and the regional community. Shakespeare’s Romeo and Juliet will be the first show in the line-up October 9-12, and it will feature dynamic staging, design, and a guest fight director to choreograph the sword fights.

Charles Dickens’ A Christmas Carol will welcome the holiday season. This vibrant telling of Scrooge, with beautiful set and costume designs, will have a special performance following the annual Celebration of Lights dinner at SAU on December 4 and run through December 7.

Student-director Christian Williams, senior from Hope, will bring his skills and creativity to lead the first spring show, The Dutchman. This 1960’s telling of a New York subway ride changes the way we view skin color.

And finally, the big spring musical will be Disney’s Beauty and the Beast. This is a classic tale of Belle and the Beast, complete with the beauty and spectacle of this musical favorite.

Season tickets are on sale now and are the best way to get tickets at an affordable price. Season tickets will only be available through the end of September and can be purchased by going to www.showtix4u.com or by calling 870-235-4256. 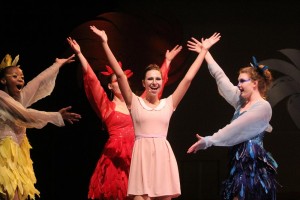 Laney Walthall, center, leads a rendition of “Amazing Gertrude” during a dress rehearsal of Seussical the Musical at Southern Arkansas University. Walthall is a recent graduate of Columbia Christian School in Magnolia. Pictured from left are Ehvan Shaw, Maggie Rubben, Walthall and Erica Storm Barnett.

This summer, many current theatre students worked in internships in professional and community theatres across the region. Recent theatre alums are also chasing their dreams. Amanda Cannon, 2013, is now living in New York City and is studying acting and developing her career. Brennan Beams, 2013, is working on his master of arts in theatre at Louisiana Tech University. Christina Johnson, 2011, is starting her third year at the University of Alabama working toward a master’s of fine arts in costume design. Christina has designed and worked shows in New York City and other professional theatres in the U.S. Kaylee Vance, 2013, recently accepted a job as the marketing coordinator at the Bass Performance Hall in Fort Worth, Texas.